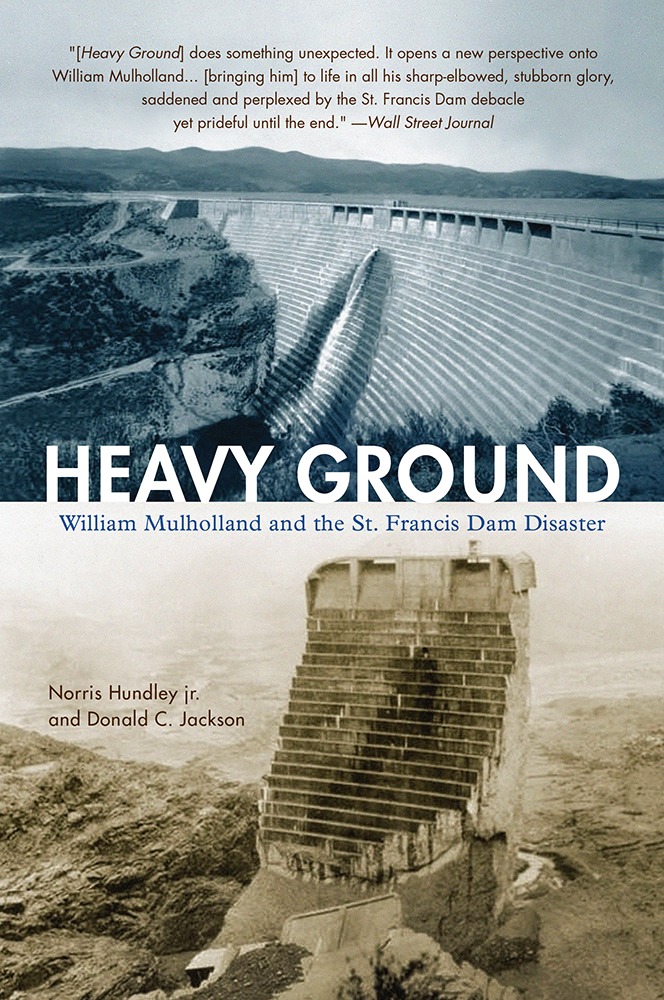 Employing copious illustrations and intensive research, Heavy Ground traces the interwoven roles of politics and engineering in explaining how the St. Francis Dam came to be built and the reasons for its collapse. Hundley and Jackson also detail the terror and heartbreak brought by the flood, legal claims against the City of Los Angeles, efforts to restore the Santa Clara Valley, political factors influencing investigations of the failure, and the effect of the disaster on congressional approval of the future Hoover Dam. Underlying it all is a consideration of how the dam—and the disaster—were inextricably intertwined with the life and career of William Mulholland. Ultimately, this thoughtful and nuanced account of the dam’s failure reveals how individual and bureaucratic conceit fed Los Angeles’s desire to control vital water supplies in the booming metropolis of Southern California.

Author Bio
Norris Hundley (1935–2013) was an author and leader in the history of the American West and in the nascent field of water history. He was a was long time member of the History Department at UCLA and served as president of both the Western History Association and the Pacific Coast Branch of the American Historical Association.

Donald C. Jackson is the Cornelia F. Hugel Professor of History at Lafayette College in Easton, Pennsylvania. He has authored many books and articles on the history of dams and hydraulic engineering.

"[Heavy Ground] does something unexpected. It opens a new perspective onto William Mulholland... [bringing him] to life in all his sharp-elbowed, stubborn glory, saddened and perplexed by the St. Francis Dam debacle yet prideful until the end."
— Wall Street Journal

“A meticulously researched… case study of the catastrophic failure north of Los Angeles in March 1928 of the St. Francis Dam that killed 400-450 people… [Heavy Ground] is exemplary for its use of previously unavailable original sources, particularly the L.A. Coroner’s Inquest report.”
— Pacific Historical Review

“A gripping account of this ill-fated dam and the person most directly responsible for its flawed design: William Mulholland.”
— Technology and Culture

"Carefully-crafted, exhaustively-researched, liberally-illustrated, and engagingly-written... an important and welcome addition to the pantheon of scholarship on California Water History."
— Southern California Quarterly

“Above all, [Hundley and Jackson] tell the story of the tragedy itself, the testimonies and recollections of survivors, the arguments over reparations for property damage and lives lost. Forget about Chinatown. This book sets a standard for scholarship that scholars will have to meet in their own research into Los Angeles’ controversial water history.”
— Western Historical Quarterly

“For its lucid explanation of the politics surrounding the [St. Francis] disaster, its minute-by-minute description of the dam’s final moments, and ensuing tidal wave that murderously swept down the valley, and its meticulous and careful analysis of the dam’s design, construction, and failure, Heavy Ground joins the list of [Hacker Prize] books displaying “exceptional scholarship” while reaching for readers “beyond the academy.” Additionally, the book superbly integrates the history of technology with social, cultural, and economic contexts.”