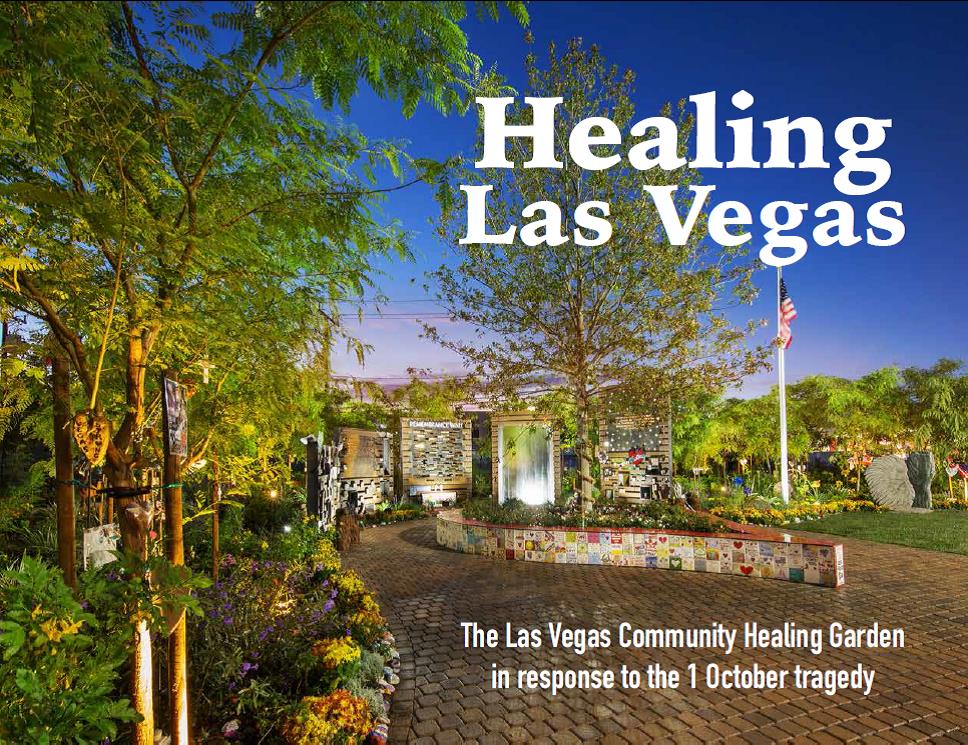 On Sunday, October 1, 2017, a gunman opened fire from thirty-two floors above a crowd of concertgoers at the Route 91 Harvest Festival on the Las Vegas Strip. The event left fifty-eight people killed, more than 860 injured, and thousands psychologically wounded. To date, this was the deadliest mass shooting in the United States in the last seventy years. Despite the chaos and terror, first responders, concert-goers, and passersby aided vic­tims and survivors. Nearby businesses, hotels, and the university provided safety and services. Medical personnel rushed to area hospitals. And as the scope of the tragedy unfolded, the people of Las Vegas flooded blood donation centers and offered food, water, comfort, and care. And they cre­ated a garden—The Las Vegas Community Healing Garden.

The story of the garden unfolds through photographs and the words of survivors, first responders, family members, medical professionals, counsel­ors, and members of the community. In only a matter of days, volunteers and local businesses transformed a vacant downtown lot into a serene urban oasis. Families and friends of those lost in the tragedy soon adopted each of the fifty-eight trees planted in honor of their loved ones, and visitors left behind colorful mementos, including painted rocks, photographs, and orna­ments, as well as words of encouragement, love, loss, and strength.

In the aftermath of 1 October, an often misunderstood city revealed its soul under the most heartbreaking of circumstances. The inspirational voices and stories from a community touched by tragedy provide comfort and encouragement. And the organic response to the unthinkable is a testa­ment to how one community came together at its darkest hour, chose hope over despair, unity over hate.
Author Bio
Healing Las Vegas is a collaboration between University of Nevada, Las Vegas, Get Outdoors Nevada as well as the many who survived the 1 October tragedy

Stefani Evans, of Las Vegas, Nevada, is a Ph.D. candidate in the History of the North American West at the University of Nevada, Las Vegas (UNLV). She is project manager for the Building Las Vegas oral history project at the Oral History Research Center at UNLV University Libraries, 2016—present, and is the Nevada delegate on the board of the Southwest Oral History Association. A former elementary school teacher, she holds a bachelor’s degree in English and master’s degrees in Educational Administration and U.S. History.

Donna McAleer’s career in publications started more than 40 years ago as an editorial assistant at the RAND Corporation. She soon developed expertise in corporate public relations and later specialized in publications management at the University of Nevada, Las Vegas, where she wrote and edited university publications for more than 30 years. She also managed UNLV’s printing and design operations. McAleer earned her bachelor and master’s degrees in English at Loyola Marymount University. She received a Master of Arts degree in Rhetoric, Linguistics, and Literature from the University of Southern California and has taught English at Loyola Marymount, USC, UNLV, and the College of Southern Nevada.
Reviews
© University of Nevada Press
Design by BDG