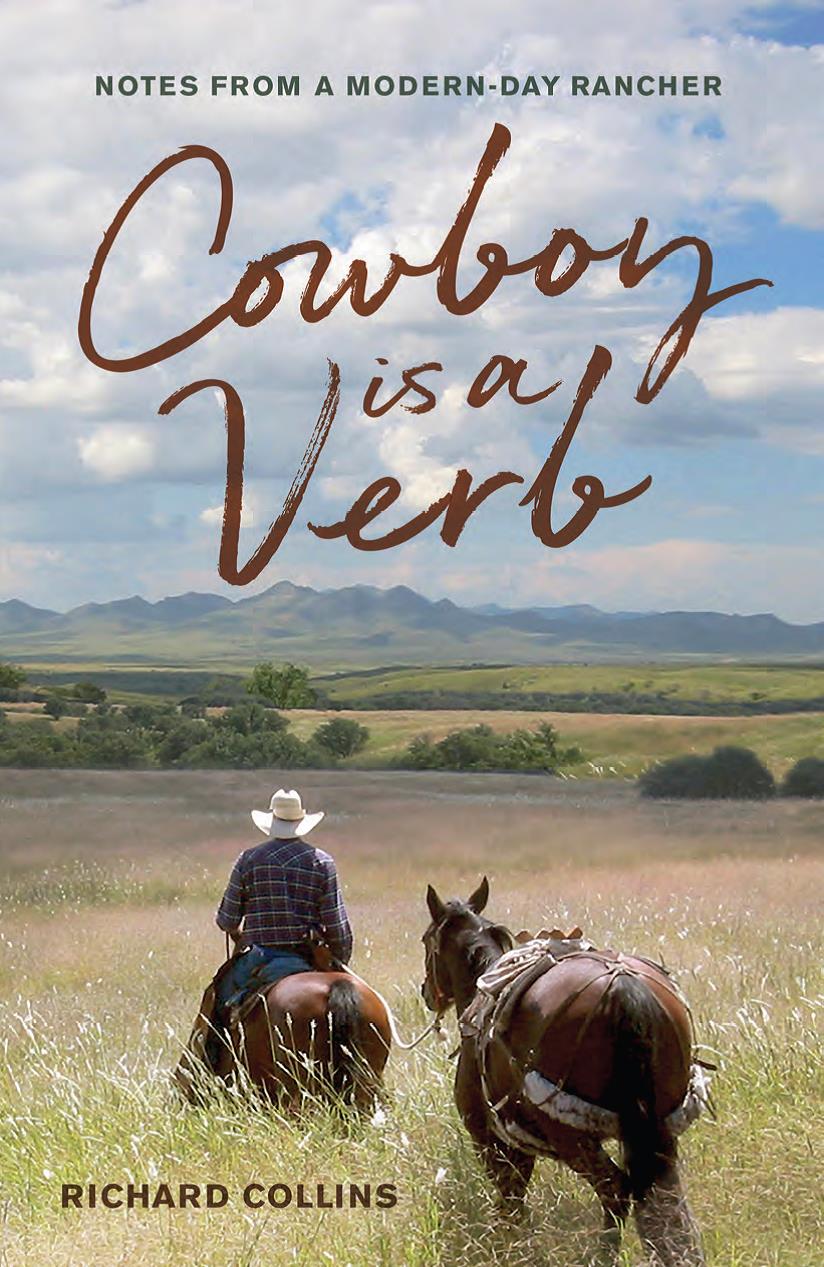 Cowboy is a Verb
Notes from a Modern-day Rancher
$24.95

From the big picture to the smallest detail, Richard Collins fashions a rousing memoir about the modern-day lives of cowboys and ranchers. However, Cowboy is a Verb is much more than wild horse rides and cattle chases. While Collins recounts stories of quirky ranch horses, cranky cow critters, cow dogs, and the people who use and care for them, he also paints a rural West struggling to survive the onslaught of relentless suburbanization.

A born storyteller with a flair for words, Collins breathes life into the geology, history, and interdependency of land, water, and native and introduced plants and animals. He conjures indelible portraits of the hardworking, dedicated people he comes to know. With both humor and humility, he recounts the day-to-day challenges of ranch life such as how to build a productive herd, distribute your cattle evenly across a rough and rocky landscape, and establish a grazing system that allows pastures enough time to recover. He also intimately recounts a battle over the endangered Gila topminnow and how he and his neighbors worked with university range scientists, forest service conservationists, and funding agencies to improve their ranches as well as the ecological health of the Redrock Canyon watershed.

Ranchers who want to stay in the game don’t dominate the landscape; instead, they have to continually study the land and the animals it supports. Collins is a keen observer of both. He demonstrates that patience, resilience, and a common-sense approach to conservation and range management are what counts, combined with an enduring affection for nature, its animals, and the land. Cowboy is a Verb is not a romanticized story of cowboy life on the range, rather it is a complex story of the complicated work involved with being a rancher in the twenty-first-century West.
Author Bio
Richard Collins is an award-winning author, rancher, horseman, conservationist, and scholar who has owned and operated farms and ranches on the borderlands of Southern Arizona since 1983.
Reviews
Collins seamlessly weaves a memoir about how he learned to ranch in southeastern Arizona with astute commentaries about the challenges of doing so in a land where most of his neighbors were exurbanites and a small endangered minnow caused more problems than the drug runners trekking through his mountain pastures.
Tom Sheridan, Professor of Anthropology, University of Arizona and author of Stitching the West Back Together
I do think this book may become a classic and sit alongside other memorable books on ranching culture.
Richard L. Knight, retired professor of wildlife conservation, Colorado State University
There is something special about being able to live and work in a landscape over many years. Each year offers a greater understanding of place and your place in it. Richard Collins shines when he is describing his beloved high desert grasslands and the people and creatures who occupy it.
Ross Humphreys, San Rafael Ranch
Collins is not only a fine storyteller, but there is generosity and exuberance in his writing and thinking that I hope will spread like wildfire to renew the many landscapes and cultures of the American West.
Gary Paul Nabhan, author of Food from the Radical Center: Healing Our Lands and Communities
Collins’ descriptions of abundant wildlife, expansive scenic views and especially the watershed that divides his ranch from north to south, all attest to his deep connection to the property that he has explored, inch by inch, on horseback… The efforts of a hands-on working rancher to sustain the viability of the land he so loves makes it likely that cowboy truly is a verb.
Betty Barr, historian and author of Hidden Treasures of Santa Cruz County
The best description of ranching in southeast Arizona that I have yet run across.
Bill McDonald, Co-founder of the Radical Center and Past President of the Malpai Borderlands Group and fifth generation rancher
Cowboy is a Verb should be read by every rancher, agency member, or any folks that just love open spaces. Using local examples to illustrate his points, Richard shows the need to add a powerful; fourth “C” to the three Cs of successful ranching. Cowboys, Cattle, and Cow Dogs—make room for Cooperation.  Anyone with feelings about the west will find things they like and things they wish Richard hadn’t brought up in this book. That is the surest way to know he has written the truth about a subject that he knows and cares deeply about.”
One of the few books available that gives a well-rounded description of modern-day ranching in the southwest… A very balanced picture of the challenges facing ranchers today.  Thanks for writing such an enlightening book and giving me the opportunity to read it.
Richard Collins was a leader in the vitally important task of building a radical center among ranchers, conservationists, and federal agencies in southern Arizona. Today, as the West and the nation continues to harden into opposing factions we need the work of radical centrists more than ever. In this thoughtful, humorous, and heartfelt memoir, Collins captures the spirit of those heady years, sharing lessons learned for all of us along the way.
Courtney White, author of Grass, Soil, Hope and co-founder of the Quivira Coalition
As a lifelong rancher and cowboy, I was mesmerized by Richard Collins’ beautifully crafted stories. What I particularly relished was Collins’ deep love of the land. His passion for conserving and improving grasslands, water, wildlife—the very environment that sustains us—shines through his articulate and moving prose. He is a down-to-earth rancher and cowboy who finds great joy in his daily tasks while never losing sight of his role as steward of the land.
H. Alan Day, author of The Horse Lover and Cowboy Up!
© University of Nevada Press
Design by BDG