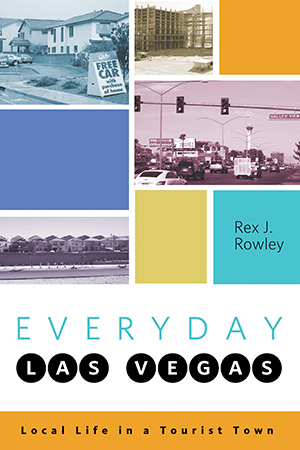 Every year, more than thirty-five million people from all over the world visit Las Vegas; only two million call the city home. Everyday Las Vegas takes a close look at the lives of those who live in a place the rest of the world considers exotic, even decadent. Using broad research, including interviews with more than one hundred Las Vegans, Rex Rowley--who grew up in Las Vegas--examines everyday life in a place that markets itself as an escape from mundane reality.

Rowley considers such topics as why people move to Las Vegas, the nature of their work and personal lives, the impact of growth and rapid change, and interaction with the overwhelmingly touristic side of the city. He also considers the benefits and perils of living in a nonstop twenty-four-hour city rich in entertainment options and easy access to gambling, drugs, and other addictions. His examination includes the previously unstudied role of neighborhood casinos patronized by locals rather than tourists and the impact that a very mobile population has on schools, churches, and community life.

Rowley considers the very different ways people perceive a place as insiders or outsiders, a dichotomy that arises when tourism is a mainstay of the local economy. His work offers insights into what Las Vegas can teach us about other cities and American culture in general. It also contributes to our understanding of how people relate to places and how the personality of a place influences the lives of people who live there.
Author Bio
Rex J. Rowley received his B.S. from Brigham Young University, and his M.A. and Ph.D. from the University of Kansas. He is an assistant professor of geography at Illinois State University where his academic interests include sense of place, qualitative GIS, and the human dimensions of sea level rise.
Reviews
“Everyday Las Vegas is a fascinating and much recommended addition to history and social issues collections, and for those who want another perspective on the city.” —The Midwest Book Review
The Midwest Book Review
“This highly readable analysis of the private side of a public city deserves a place in all academic libraries. Highly recommended.” —Choice
Choice
© University of Nevada Press
Design by BDG