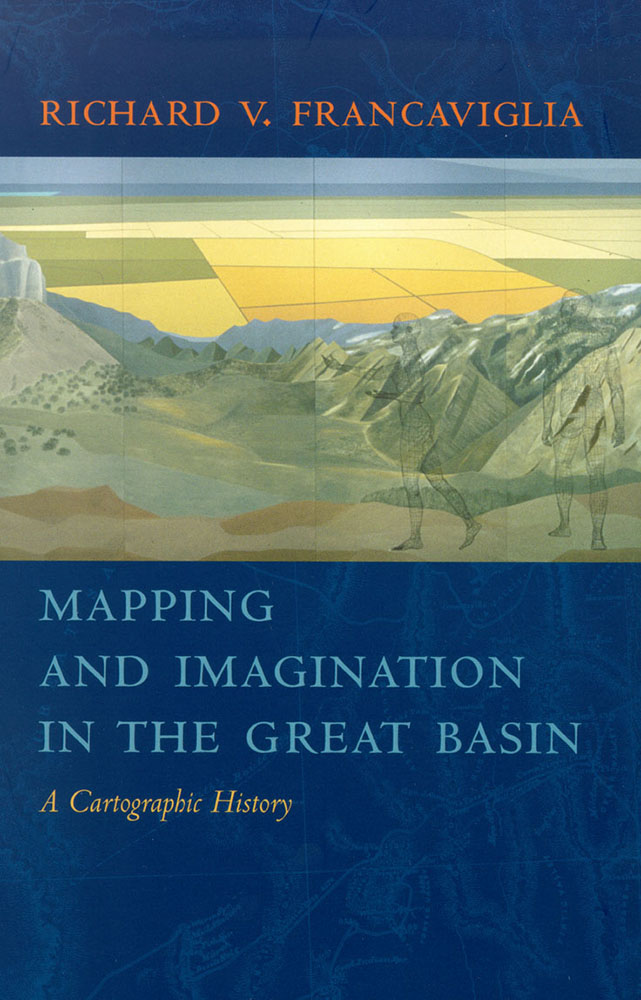 Mapping And Imagination In The Great Basin
A Cartographic History
$24.95

The Great Basin was the last region of continental North America to be explored and mapped, and it remained largely a mystery to Euro-Americans until well into the nineteenth century. In Mapping and Imagination in the Great Basin, geographer-historian Richard Francaviglia shows how the Great Basin gradually emerged from its “cartographic silence” as terra incognita and how this fascinating process both paralleled the development of the sciences of surveying, geology, hydrology, and cartography and reflected the changing geopolitical aspirations of the European colonial powers and the United States. Francaviglia’s interdisciplinary account of the mapping of the Great Basin combines a chronicle of the exploration of the region with a history of the art and science of cartography and of the political, economic, and cultural contexts in which maps are created. It also offers a compelling, wide-ranging discussion that combines a description of the daunting physical realities of the Great Basin with a cogent examination of the ways humans, from early Native Americans to nineteenth-century surveyors to twentieth-century highway and air travelers, have understood, defined, and organized this space, psychologically and through the medium of maps. Mapping and Imagination in the Great Basin continues Francaviglia’s insightful, richly nuanced meditation on the Great Basin landscape that began in Believing in Place.

Richard V. Francaviglia is professor of history and geography and director of the Center for Greater Southwestern Studies and the History of Cartography at the University of Texas in Arlington. As both historian and geographer, he is especially interested in the way places change through time, and how that change is depicted in maps, literature, art, and popular culture. His administrative interests include working with university faculty and staff to develop proposals, and to secure outside funding, for innovative educational programs. Francaviglia received his A.A. from Foothill College, Los Altos Hills, California with highest honors (1965), B.A. from University of California at Riverside with high honors (1967), and M.A. and Ph.D. (1970) from the University of Oregon (Geography major, Art History minor). He taught at the University of Minnesota, Antioch College, University of Arizona, and Wittenberg University, and is currently a Professor of History and Geography at the University of Texas at Arlington. He teaches courses in historical geography, the history of cartography, environmental history, geography of the West, historical methods, public history, history and film, and natural history images and scientific illustration. His research interests Include the role of maps and natural history illustrations in the history of discoveries; the ways in which environments are shaped by individuals, corporations, and religious groups; mining and transportation history; cartographic history; the history of geology, geomorphology, and mineralogy.

"That the author chose a challenging subject matter for his book is an understatement — even with more than four centuries of exploration, atlases, and maps for use as guides, most Americans have only the haziest concept of exactly where the Great Basin is...That Francaviglia succeeds so admirably is a testment to his painstaking research, organizational skills, attention to details, and highly readable prose....His study contributes significantly to the monographic literature on the history of exploration and discovery, and it integrates research by historical geographers, cartographers, and historians of science with primary source materials and map interpretation....This book should take its place alongside classics such as John Logan Allen's Passage to the Garden (1974), the works of William Goetzmann on the exploration of the American West, and related studies on the history of science in the age of discovery." —Russell S. Kirby, Cartographic Perspectives, Winter 2006

"A first-rate piece of cartographic history, Richard V. Francaviglia's well written and copiously illustrated account considers the imaginative grasping and presentation of the Great Basin through maps and other forms of spatial awareness. This is at once a key text in cartographic history that has much to offer to scholars, students and general readers alike, and an insightful approach to an important aspect of American history. . . . The approach taken in this impressive book could be profitably adopted for other regions, and is a reminder of how much cartographic scholarship offers historians of America." —Jeremy Black, History: Reviews of New Books, Summer 2005

"The author's passion for this region shines through as his work attempts to explain why this beautiful land was neglected and misunderstood by early explorers and cartographers. In addition to the specific stories of the region, the author provides great insight into the history and development of cartography as a profession, and its ability to both obfuscate and illuminate the secrets of the land." —Brian C. Payne, Journal of the West, October 2005

"Richard Francaviglia is one of the finest, if not the finest, interpreter of American landscapes writing today....Francaviglia operates from the assumption that the region’s landscapes were so overwhelming that they forced observers to organize them into recognizable shapes and forms in order that they might be understood. The rich panoply of maps that grace the book provides evocative visual evidence of this tendency, and the dozens of maps that the book contains, along with lucid and graceful prose, make up the book’s real strength and power.” —John L. Allen, Western Historical Quarterly, Winter 2006

"This book will be useful to several academic audiences. Environmental scientists, cartographers, and geographers have much to gain by considering the social and historical relativity of science and map making. Historians will appreciate Francaviglia's points concerning the role of scientists and even the environment played in shaping the history of the American West. And anyone who has ever visited the Great Basin, taken an interest in western exploration, or attempted to re-fold an unwieldy map after careful scrutiny will enjoy his insights." —David Miller, Journal of San Diego History, December 2006