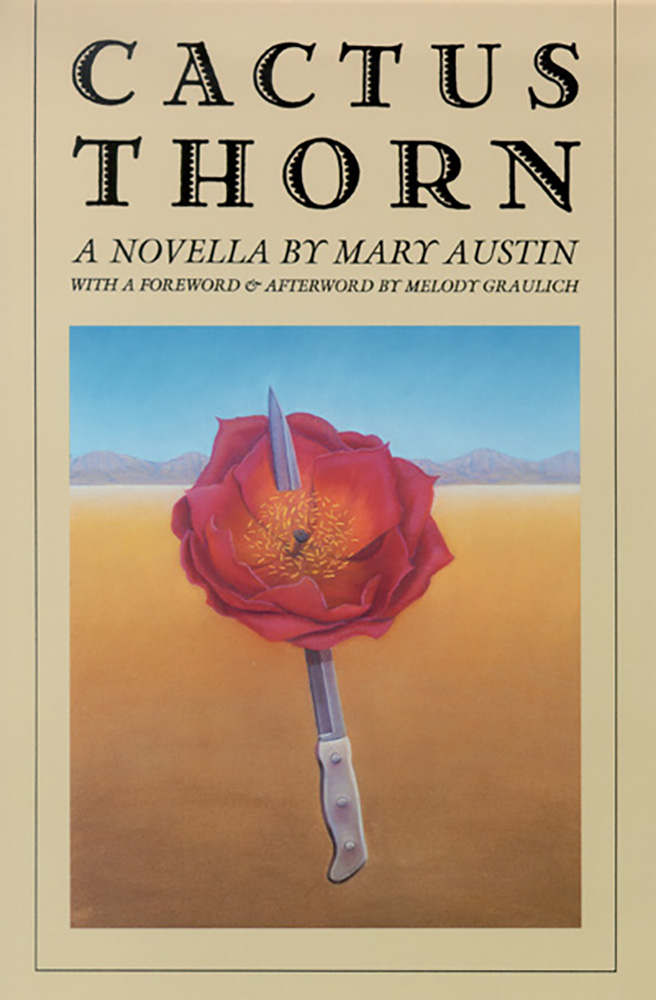 Set primarily in the lonesome southwest desert lands of the 1920s, this novella is a powerful story in which landscape reflects and defines character. In this beautifully written tale, a promising young politician, Grant Arliss, flees from this pressure-ridden life in New York City to the serenity of the desert’s open spaces.
There, he finds not only a place to sort out his confusion but also a remarkable woman, unlike any he has met. In his eyes, Dulcie Adelaid is an aloof creature of the desert who relies only on herself. Challenged and yet inhibited by the desert’s unrelenting force, Arliss admires Dulcie’s instinctive ability to thrive in the harsh country. She also provides a spiritual sustenance that he has never found with any other woman. Together they engage in lively conversations about his political convictions and her beliefs and values. Inspired, Arliss returns to New York where he delivers eloquent speeches to an overwhelmingly supportive constituency.
Placing Cactus Thorn in biographical, feminist, and literary perspective, Melody Graulich's commentary discusses how Austin’s themes are timeless in setting and moral tone. Foreword and afterword by Melody Graulich.
Author Bio
Mary Austin (1868-1934) wrote more than 30 books during her career, including Land of Little Rain (1903) and Lost Borders (1909). Born in Carlinsville, Illinois, Mary Austin eventually ventured west with her brother and widowed mother to homestead in California. Throughout her essays, poems, plays, and stories, she focused on environmental issues and the relationship between individual experience and cultural histories.
Reviews
"Formal in its dialogue, passionate and romantic in its evocation of the Southwest, where the central action takes place, this slender novella is at heart a feminist tract. . . . Written in 1927 and never before published, the story is timeless in setting and moral tone. Like Austin's other novels (Earth Horizon, Land of Little Rain), it is a powerful enactment of a woman's need to choose between a man and the land she loves." —Publishers Weekly
"In Cactus Thorn, Austin has combined the clear, bone-deep prose of her finest landscape writing with a complex psychological portrait of a love affair, producing what must surely rank as a new classic of western American literature."
—San Francisco Review of Books
"Mary Austin speaks powerfully to our own historical movement, for she experienced and wrote about much that feminist scholars have recently unearthed—the transformative power of the land, the costs of women’s lives of action, essential tensions between the sexes, a woman’s love of what men once called the waste places of the West."
—The Women’s Review of Books
"To paraphrase Graulich's summation: this book liberates a woman's wit, anger, and imagination."
—Judy Nolte Lensink, Wellesley College Center for Research on Women
© University of Nevada Press
Design by BDG