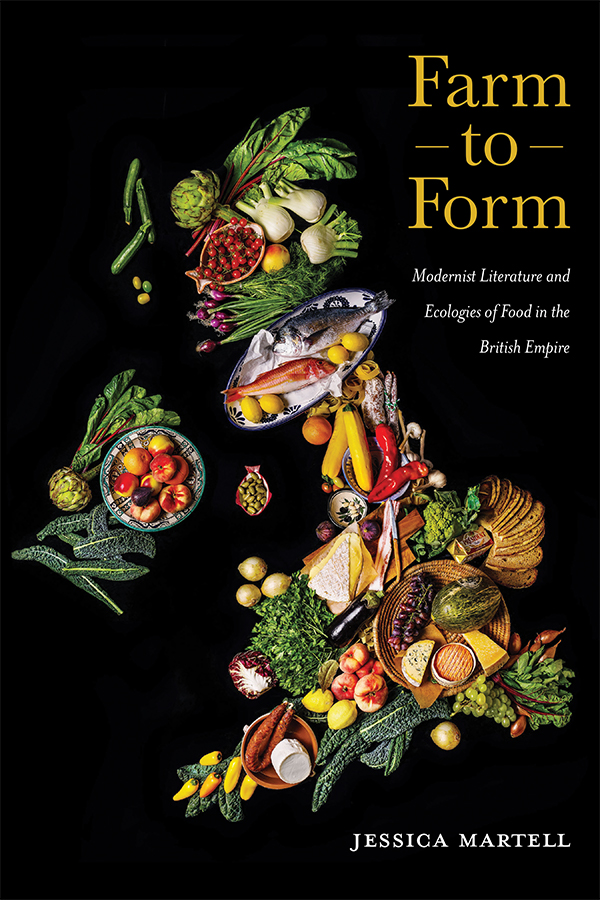 Farm to Form
Modernist Literature and Ecologies of Food in the British Empire
$55.00

In this groundbreaking book, Jessica Martell investigates the relationship between industrial food and the emergence of literary modernisms in Britain and Ireland. By the early twentieth century, the industrialization of the British Empire’s food system had rendered many traditional farming operations, and attendant agrarian ways of life, obsolete. Weaving insights from modernist studies, food studies, and ecocriticism, Farm to Form contends that industrial food made nature “modernist,” a term used as literary scholars understand it—stylistically disorienting, unfamiliar, and artificial but also exhilarating, excessive, and above all, new. Martell draws in part upon archives in the United Kingdom but also presents imperial foodways as an extended rehearsal for the current era of industrial food supremacy. She analyzes how pastoral mode, anachronism, fragmentation, and polyvocal narration reflect the power of the literary arts to reckon with—and to resist—the new “modernist ecologies” of the twentieth century.

In light of climate change, fossil fuel supremacy, nutritional dearth, and other pressing food issues, modernist texts bring to life an era of crisis and anxiety similar to our own. In doing so, Martell summons the past as a way to employ the modernist term of “defamiliarizing” the present so that entrenched perceptions can be challenged. Our current food regime is both new and constantly evolving with the first industrial food trades. Studying earlier cultural responses to them invites us to return to persistent problems with new insights and renewed passion.