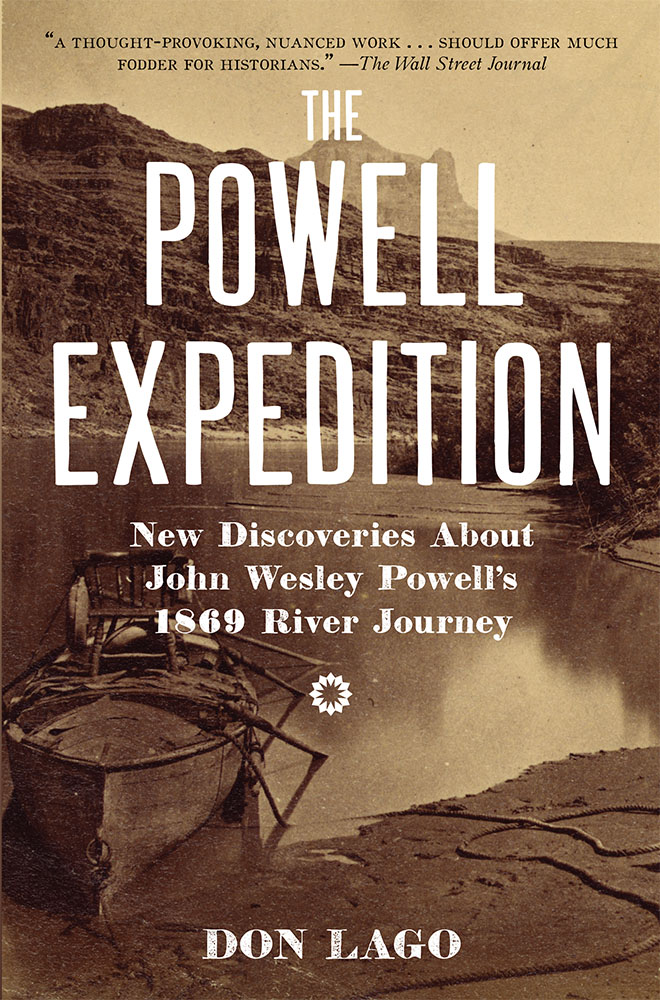 "The Powell Expedition is a thought-provoking, nuanced work that reads at times like a detective story, and it should offer much fodder for historians."
—The Wall Street Journal

John Wesley Powell’s 1869 expedition down the Green and Colorado Rivers and through the Grand Canyon continues to be one of the most celebrated adventures in American history, ranking with the Lewis and Clark expedition and the Apollo landings on the moon. For nearly twenty years Lago has researched the Powell expedition from new angles, traveled to thirteen states, and looked into archives and other sources no one else has searched. He has come up with many important new documents that change and expand our basic understanding of the expedition by looking into Powell’s crewmembers, some of whom have been almost entirely ignored by Powell historians. Historians tended to assume that Powell was the whole story and that his crewmembers were irrelevant. More seriously, because several crew members made critical comments about Powell and his leadership, historians who admired Powell were eager to ignore and discredit them.

Lago offers a feast of new and important material about the river trip, and it will significantly rewrite the story of Powell’s famous expedition. This book is not only a major work on the Powell expedition, but on the history of American exploration of the West.
Author Bio
Don Lago is one of the most respected historians of the Grand Canyon, and the author of Grand Canyon: A History of a Natural Wonder and National Park. He has published more than 50 personal essays in national magazines and literary journals. His latest book is Where the Sky Touched the Earth: Cosmological Landscapes of the Southwest. He lives in Flagstaff, Arizona.
Reviews
"The Powell Expedition is a thought-provoking, nuanced work that reads at times like a detective story, and it should offer much fodder for historians."
The Wall Street Journal
"Lago examines many theories about the fate of three members of Powell’s expedition who left the river before the end of the journey and were never seen again. While the true fate of these explorers may never be known, there are enough leads in this account to entertain Colorado River rafters around campfires for years. Grand Canyon enthusiasts will find much to consider in this book."
Library Journal
"This is no straightforward river adventure, but rather a collection of multiple intriguing theories about various disputed facts, making for excellent campfire stories after a long day on the river."
Publisher's Weekly
"Lago is a storyteller, and his accessible, sprightly writing style makes what could be a mind-numbing collection of facts read like an adventure yarn."
New York Journal of Books
"Written in a refreshingly transparent first-person style, Lago demythologizes Powell, corrects past libels and properly puts the focus on his crew. This book will be of interest to historians and river rats alike."
True West Magazine
"Lago’s latest book is the result of 20 years of research across 13 states, digging into the history of the expedition’s individual crew members to tell a far more specific story that the broad tale of river running and canyon mapping.”
Grand Canyon News
"Conjecture (readily admitted) and tangential wanderings pervade the text, resting comfortably alongside nuggets of deep research that rewrite important aspects of Powell's story and offer insight on Western exploration."
Roundup Magazine
"Don Lago’s The Powell Expedition: New Discoveries about John Wesley Powell’s 1869 River Journeytakes a new, fresh look at the 1869 expedition down the Green and Colorado Rivers led by John Wesley Powell. He concentrates especially on the often-overlooked members of the crew, and the events that led to distrust, tension, and the eventual departure of three members of the party, as well as an in-depth look at the deaths of those three and the subsequent lives of most, if not all, of the men. The book is definitely a significant and novel contribution to the literature on Powell, and that’s saying something. The sources Lago consulted are astounding, in a word.”
Roy Webb, author of Riverman: The Story of Bus Hat
“Don Lago has spent over 20 years researching Powell’s 1869 river expedition, ferreting out details nobody else has discovered, myth-busting, speculating, and clarifying the whys and wherefores of the trip. This book is a culmination of those details and speculation, with updates on his previous writings and adding a wealth of new material. Lago covers topics no other Powell biographer/author has addressed, or ones in this depth.”
Richard Quartaroli, special collections librarian emeritus, Northern Arizona University
"In search of answers and explanations, he delves into details of chronologies, genealogies, and politics, but he keeps the stories alive by following out speculations and connections along unexpected trails of evidence... Offering many intriguing new ideas and directions for further research, Lago's The Powell Expedition will be of great interest to scholars of Powell's survey.  For anyone with an interest in Colorado River history, Lago's book will be enjoyable reading."
The Western Historical Quarterly
"Anniversaries of key historical events spawn books, and the 150th anniversary of John Wesley Powell's 1869 exploration of the Green and Colorado Rivers has bred several.  The best of these so far is Don Lago's The Powell Expedition. The most revered writers on the topic tend to be either academics or rivers guides, erstwhile or present. Academics bring the best tools of their disciplines to the subject, while river guides bring their understanding of the river. Lago, a respected Grand Canyon historian, brings both...he manages to do what office-bound writers find difficult: give the reader a sense of what it is like to be on the river at night, jawing with longtime guides steeped in the sources who love to explore mysteries that have no definitive answers. If you are serious about understanding Powell's first expedition down the Green and Colorado Rivers, this is the book to read during this sesquicentennial year."
Utah Historical Quarterly
© University of Nevada Press
Design by BDG