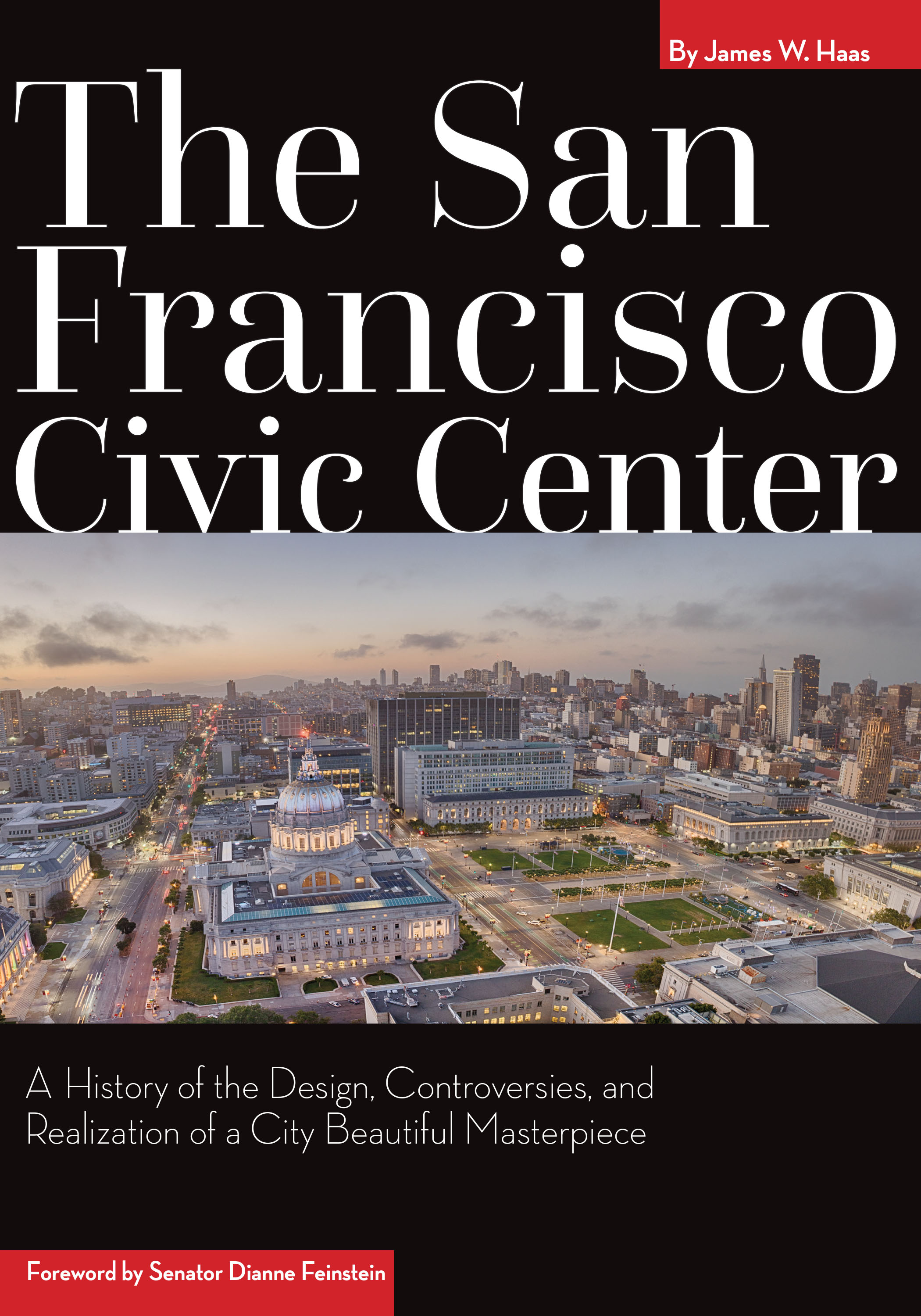 San Francisco Civic Center
A History of the Design, Controversies, and Realization of a City Beautiful Masterpiece
$34.95

San Francisco is known and loved around the world for its iconic man-made structures, such as the Golden Gate Bridge, cable cars, and Transamerica Pyramid. Yet its Civic Center, with the grandest collection of monumental municipal buildings in the United States, is often overlooked, drawing less global and local interest, despite its being an urban planning marvel featuring thirteen government office and cultural buildings.

Haas meticulously unravels the Civic Center’s story of perseverance and dysfunction, providing an understanding and appreciation of this local and national treasure. He discusses why the Civic Center was built, how it became central to the urban planning initiatives of San Francisco in the early twentieth century, and how the site held onto its founders’ vision despite heated public debates about its function and achievement. He also delves into the vision for the future and related national trends in city planning and the architectural and art movements that influenced those trends.

Riddled with inspiration and leadership as well as controversy, The San Francisco Civic Center, much like the complex itself, is a stunning manifestation of the confident spirit of one of America’s most dynamic and creative cities.
Author Bio
James W. Haas is an author, attorney, and expert on San Francisco’s Civic Center history and politics. He has lived in San Francisco most of his life and spent more than forty years engaged in civic projects, including the restoration and completion of San Francisco’s Civic Center.
Reviews
“Jim Haas takes his record of service to the City to a higher level by bringing to light the unique history of the Civic Center. By doing so, he helps us not only to understand how the Civic Center came to be, but also to grasp its significance and central place in San Francisco's past, present, and future.”
Senator Dianne Feinstein, from the foreword
"That notoriously Victorian city, San Francisco, does occasionally surprise with moments of unbounded classicism: its City Hall represents one of the best and most beautiful expressions of the style. Happily, James Haas has done the buildings justice in his thorough and exhilarating book, which I consider a must-read for any devotee of Classical Architecture, or any architecture for that matter!"
Peter Lyden, President, Institute of Classical Architecture and Art
"We're often strangely drawn to love affairs. I deeply admire Jim Haas' passion and persistence in pursuit of his love for San Francisco's Civic Center. This exquisite book invites us to eavesdrop on and understand why our thoughtful author has stayed so loyal to this urban architecture love affair."
Chip Conley, hospitality entrepreneur and bestselling author
"San Francisco’s remarkable Civic Center comes alive in this book. Not only is it a comprehensive history of the Civic Center, it is an extremely thoughtful reminder of how public spaces and public buildings can be monuments of democracy and design.”
William Deverell, Director, Huntington-USC Institute on California and the West
© University of Nevada Press
Design by BDG