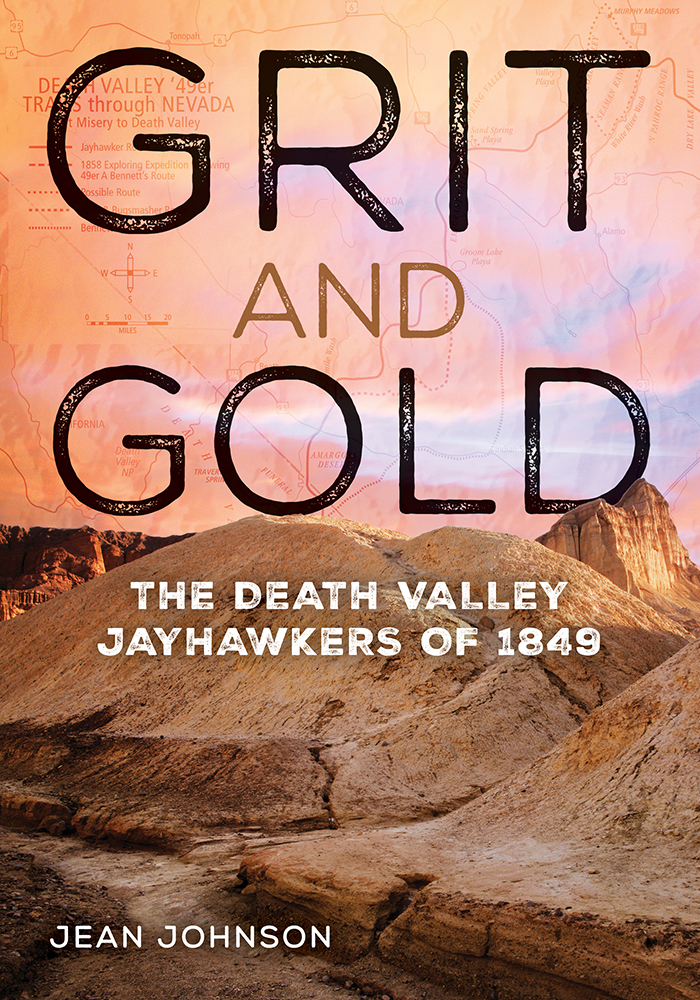 No other Western settlement story is more famous than the Donner Party’s ill-fated journey through the Sierra Nevada Mountains. But a few years later and several hundred miles south, another group faced a similar situation just as perilous. Scrupulously researched and documented, Grit and Gold tells the story of the Death Valley Jayhawkers of 1849 and the young men who traveled by wagon and foot from Iowa to the California gold rush.  The Jayhawkers’ journey took them through the then uncharted and unnamed hottest, driest, lowest spot in the continent—now aptly known as Death Valley.

After leaving Salt Lake City to break a road south to the Pacific Coast that would eliminate crossing the snowy Sierra Nevada, the party veered off the Old Spanish Trail in southern Utah to follow a mountaineer’s map portraying a bogus trail that claimed to cut months and hundreds of miles off their route to the gold country. With winter coming, however, they found themselves hopelessly lost in the mountains and dry valleys of southern Nevada and California.  Abandoning everything but the shirts on their backs and the few oxen that became their pitiful meals, they turned their dreams of gold to hopes of survival.

Utilizing William Lorton’s 1849 diary of the trek from Illinois to southern Utah, the reminiscences of the Jayhawkers themselves, the keen memory of famed pioneer William Lewis Manly, and the almost daily diary of Sheldon Young, Johnson paints a lively but accurate portrait of guts, grit, and determination.
Author Bio

Jean Johnson is the co-author of several books, including Escape from Death Valley. She has spent more than forty years researching the history of Death Valley National Park and served on the board of Directors of the Death Valley ’49ers Inc.

Reviews
“Jean Johnson draws together a variety of sources of information into a coherent account of the journey.  She has also correlated written documents with on the ground observations over the route of travel of the young men.  In the many years she has been working in this field, she has uncovered a great deal of previously unknown information.”
Judy Palmer
"Fully engrossing.....Jean Johnson’s impeccably researched and fluidly written Grit and Gold follows the 1849 Jayhawkers’ journey from the Plains across the merciless deserts of the American Southwest and into California. A tale of friendship, compassion, tragedy, and victory, it is destined to become a classic of Western American history."
Marlene Smith-Baranzini, Editor, Overland Journal
“Jean Johnson is one of the few real experts on Death Valley’s pioneer history. Her books are a must read for anyone interested in Death Valley.”
David Blacker, Executive Director, Death Valley Natural History Association
"Interest in western United States history should include those original pioneers who decided to take alternative routes through the Southwest just as much as the Donner Party and others who took the more traditional path across the Great Plains."
New York Journal of Books
Death Valley historian Jean Johnson tells their harrowing tale in her new book…
“… a necessary addition to any serious library on the frontier West.”
The Tombstone Epitaph
Johnson has gone to great lengths in personally going onsite to identify places mentioned in primary sources and the trails the Jayhawkers followed. Photographs and excellent maps enrich the narrative. Today’s trail enthusiasts will find the volume a useful source.
Roundup Magazine
© University of Nevada Press
Design by BDG