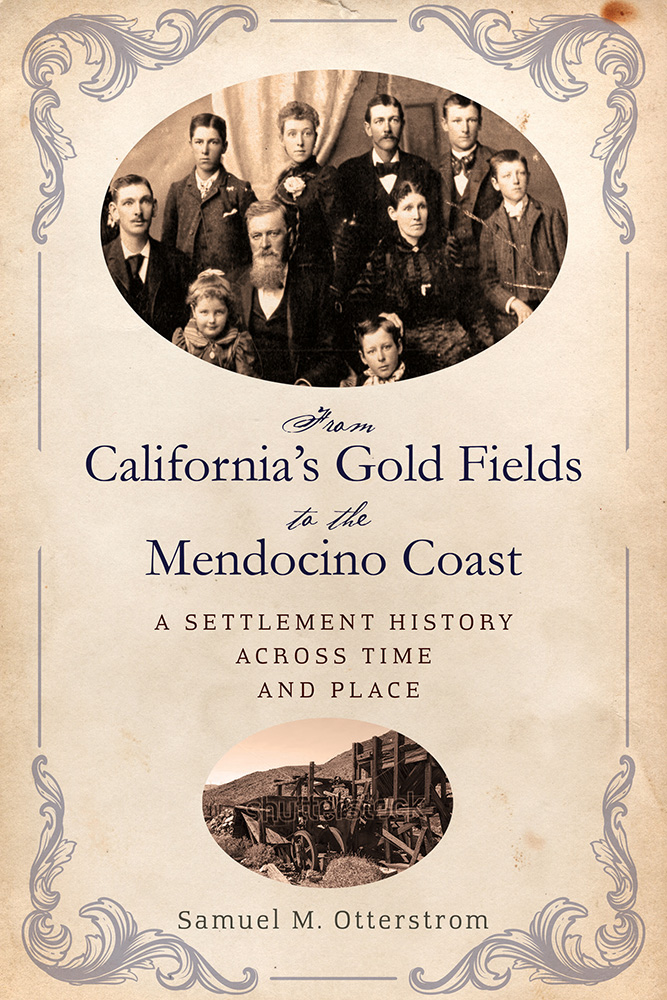 From California's Gold Fields to the Mendocino Coast
A Settlement History Across Time and Place
$44.95

California’s history is rich and diverse, with numerous fascinating stories hidden in its past. Before the discovery of gold in the Sierras, San Francisco (Yerba Buena) and its surroundings comprised a sparsely populated frontier on the edge of the old Spanish realm. After 1848, the area rapidly transformed into a settled urban system as a tremendous influx of prospectors and settlers came to seek their fortune in California. A wave of gold miners, merchants, farmers, politicians, carpenters, and many others from various backgrounds and corners of the world migrated to the area at that time. Interrelated social, geographic, and economic processes led to a very quick metamorphosis from frontier settlement to a firmly established system with ingrained economic patterns.

The development of San Francisco’s outlying region from a wilderness into a prosperous village and farming mecca shows how quickly in-migration coupled with economic diversification can establish a stable settlement structure upon the landscape. Otterstrom describes an intricately woven tapestry of interrelated people who were contributing creators of a wide variety of prosperous northern California environs. He uncovers the processes that converted this sleepy post-Mexican outpost into a focal point of nearly hyperactive youthful growth. The narrative follows this crucial story of settlement development until the dawn of the twentieth century, through the interconnected framework of individual and family ingenuity, migration trajectories, and diverse geographical scales.

Multiplying individualistic experiences from across far-flung appendages of the Northern California system into larger and larger scales, Otterstrom has achieved a matchless historical and sociological study that will form the basis for any future studies of the area.

Samuel M. Otterstrom is a professor of geography at Brigham Young University. He is the editor of two books on United States historical geography, and has written many articles about modern and historical population and settlement geography of the U.S. and parts of Latin America and Europe.

Reviews
"Overall, Otterstrom proves that Gold Rush migrants did not stop moving when they got to California. Always searching for the next opportunity, these travelers expanded into the hinterland of Northern California, developing agriculture and bolstering the metropolis of San Francisco. His careful mapping of the social history of Northern California is an effective supplement to any study of Gold Rush emigration." —The Western Historical Quarterly

"The book presents an academically rigorous and thorough narrative that charts the early development of northern California and the San Francisco Bay region from its rather inauspicious beginnings in small- scale mining camps into a subnational regional economic system. This is accomplished largely through a detailed and impressive empirical assessment of intergenerational migration to the region relying on genealogical data and family histories, and it is this that sets the study apart from other regional historical settlement geography studies." —Historical Geography

“The historiography of the California Gold Rush and its aftermath is among the richest and deepest in Western Americana. Otterstrom is to be congratulated for attempting a new kind of sophisticated analysis of migration and settlement and applying it to a region that has long held a special place in the geographical imagination. As far as I can tell, there is presently no direct competition for this book. The approach is fresh and it adds to the literature in a meaningful way.” —David Larson, Professor of Geography and Environmental Studies, California State University, East Bay
© University of Nevada Press
Design by BDG