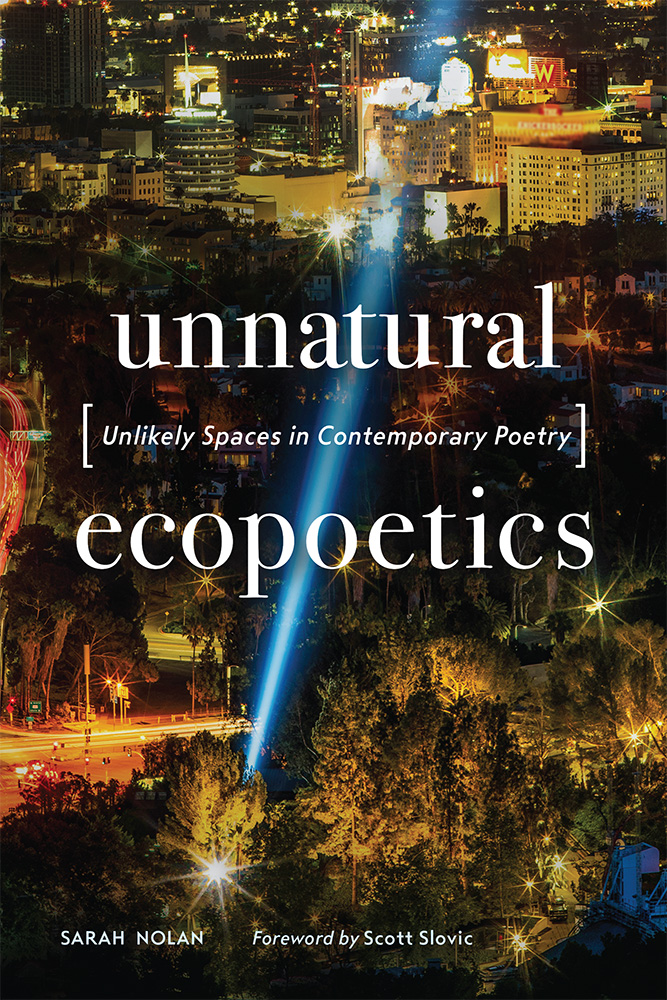 What constitutes an environment in American literature is an issue that has undergone much debate across environmental humanities in the last decade. In the field, some have argued that environments are markedly natural or wild sites while others contend literary spaces can be both wild and urban, or even cultural. Yet, few of the works produced to date have addressed the pronounced influence the author of a text has on a literary environment. Despite exciting work on materiality and culture in conceptions of environments, critics have not yet fully examined the contributions of poetry’s language, form, and self-awareness in rethinking what constitutes an environment.

By approaching environments in a new way, Nolan closes this gap and recognizes how contemporary poets employ self-reflexive commentary and formal experimentation in order to create new natural/cultural environments on the page. She proposes a radical new direction for ecopoetics and deploys it in relation to four major American poets. Working from literal to textual spaces through the contemporary poetry of A.R. Ammons’s Garbage, Lyn Hejinian’s My Life, Susan Howe’s The Midnight, and Kenneth Goldsmith’s Seven American Deaths and Disasters, the book presents applications of unnatural ecopoetics in poetic environments, ones that do not engage with traditional ideas of nature and would otherwise remain outside the scope of ecocritical and ecopoetic studies.

Nolan proposes a new practical approach for reading poetic language. Ecocriticism is a very fluid and evolving discipline, and Nolan’s pioneering new book pushes the boundaries of second-wave ecopoetics—the fundamental issue being what is nature/natural, and how does poetic language, particularly self-conscious contemporary poetic agency, contribute to and complicate that question.
Author Bio
Sarah Nolanis a lecturer at University of Nevada, Reno, where she works on American poetry and contemporary literature. She has contributed articles to many key journals and collections, including Green Letters: Studies in Ecocriticism,Studies in American Culture, and New International Voices in Ecocriticism.
Reviews
“Nolan’s book develops out of new materialist innovations transcending traditional ecopoetical interpretations of poetry. Her dazzling close readings are exciting to behold. They create a web of convincing matter that shore up her masterful take and development of this exciting field.” ―Susan Morrison, Professor of English, Texas State University, San Marcos
“A product of the built environments of greater Los Angeles whose ecopoetic ideas have been tempered by years of living in the Great Basin Desert on the eastern slope of the Sierra Nevada Mountains, Nolan thoroughly understands the natureculture continuum, while also recognizing and valuing the meaning of natural forces that exceed and constrain the human. She offers an ecumenical view of what an ‘environment’ is and how ‘this new era of ecopoetical theory’ enables readers to appreciate the materiality of texts and the textuality of the physical world.” —Scott Slovic, Professor of Literature and Environment, University of Idaho
© University of Nevada Press
Design by BDG