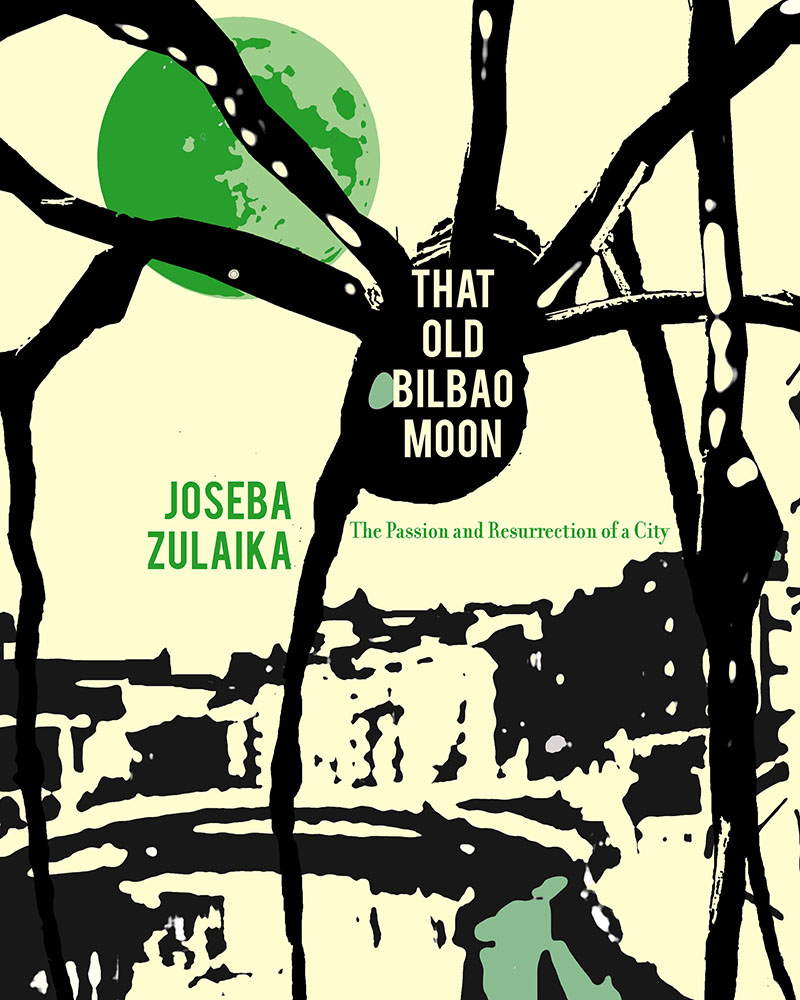 That Old Bilbao Moon: The Passion and Resurrection of a City
$25.00

That Old Bilbao Moon is a memoir, an ethnography of desire, an essay tracking a generation’s consciousness, a manifesto for a new city and a new subject after the shipwreck. This Dantean narration presents “characters,” including its author, whose lives do not conform to ideal cultural models. They are rather figures under the threat of disintegration who require self-transformation for their survival. Every conversation and event here narrated is ethnographically factual, yet the book is essentially about the fundamental fantasies and subjective conversions of a generation surrendered to “the passion for the real.” This Bilbao generation of the sixties—branded inaugurally by the trauma of ETA, socialism, atheism, Aresti’s Maldan behera (Downfall), the survival of Euskara, the art of Oteiza and Chillida, feminism—found in Frank Gerhy’s “shipwreck” masterpiece its ultimate emblem and the promise of a new city. It is the architecture of labyrinth, a building of cuts and torsions, “the reincarnation of Marilyn Monroe” (Muschamp), turned into the new face of “that old Bilbao moon” that Brecht sang as “the most beautiful in the world.” Because even after the ruins and the defeat the mandate persisted: you must change your life, you must transform your city.
Author Bio
Joseba Zulaika received his licentiate in philosophy from the University of Deusto, Spain, in 1975; his MA in social anthropology from Memorial University of Newfoundland, Canada, in 1977; and his Ph.D. in cultural anthropology from Princeton in 1982. He has taught at the University of the Basque Country, at the University of California, Santa Barbara, and at the University of Nevada, Reno, since 1990, where he [has just retired] as a researcher with the Basque Studies Program. He has published the following books relevant to this course: Terranova: The Ethos and Luck of Deep-Sea Fishermen, ISER, Newfoundland, 1981; Basque Violence: Metaphor and Sacrament, University of Nevada Press, Reno, 1988 (Spanish translation, Violencia Vasca: Metáfora y Sacramento, Nerea, Madrid, 1990); Bertsolariaren Jokoa eta Jolasa, Baroja, Donostia, 1985; Tratado Estético-Ritual Vasco, Baroja, San Sebastián, 1987; Chivos y soldados: la mili como ritual de iniciación, Baroja, San Sebastián, 1989; Ehiztariaren erotica, Erein, Donostia, 1990 (Spanish translation, Caza, símbolo, eros, Nerea, Madrid, 1992); with William Douglass and Stanford Lyman, Migración, etnicidad y etnonacionalismo, Universidad del País Vasco, Bilbao, 1995; with William Douglass, Terror and Taboo: The Follies, Fables and Faces of Terrorism, Routledge, New York, 1996; Del Cromañón al Carnaval: los vascos como museo antropológico, Erein, San Sebastián, 1996; Crónica de una seducción: el Museo Guggenheim Bilbao, Nerea, Madrid, 1997. He has published numerous articles in professional journals as well.
Reviews
“This is not a book about Bilbao, nor is it an ethnography of the Basque city. It is, rather, a multi-layered by-product of Bilbao – a book possessed by its history, people, ghosts, and art. A broad range of entities populate Zulaika's (auto-)ethnography: poems, memories, rites, artists, politicians, songs, buildings, paintings, sculptures, monks, terrorists, junkies, homeless, and many more. The book – taking its title from a Brecht poem – is organized into three parts titled after the divisions of Dante's Divine comedy: ‘Hell’, ‘Purgatory’, and ‘Paradise’. In effect, the book aims at resuscitating – albeit in a new form – the revolutionary desire that drove a generation's derailed struggle for a more just society. The generation in question is Zulaika's own: Basque men born – like the author (b. 1948) – under Franco's dictatorship, who grew up secluded in seminaries and were confronted, at a young age, with two competing projects of transcendence: ETA and the church, terrorism, and sanctity.”
—Journal of the Royal Anthropological Institute
“That Old Bilbao Moon overflows with ideas and characters. Zulaika incorporates his conversations and interviews with artists, architects, singers and poets, punks, priests, soccer fans, the girls who work at Zara, the unemployed and homeless, the women and men who care for drug addicts. Even the wide margins of the pages provide space for reproductions and translations of poems, extensive quotes, and images ranging from paintings to Basque fanzines. The questions of desire, love, sacrifice, religion, and violence are omnipresent. Zulaika turns these questions over and over again throughout the book; he probes them delicately and insistently and uses them to revisit his previous work on hunting, Basque culture, terrorism, and the Bilbao Guggenheim. His writing is spare and compelling and often beautiful. Zulaika contributes to the study of terror, of religiosity, of the Basque Country, of the beauty, banality, and pain in everyday urban life. At one point, he writes of his visit with José, a Capuchin friar whose life's work was helping heroin addicts and their families. Zulaika reflects, “As I listened to José’s horror stories, I saw the man who I perhaps might have become had I not failed in my religious career. His life … was a direct challenge to mine—my writing was worthwhile only if it had the intensity of his wager” (174). Zulaika's writing has the burning urgency of bearing witness. The question his book poses to us, as anthropologists and writers, is: Why and for whom do we work and write? This, of course, is not a new question in anthropology. But Zulaika's book has the capacity to transform how we answer it.”
—AnthroSource, published by the American Anthropological Association
© University of Nevada Press
Design by BDG