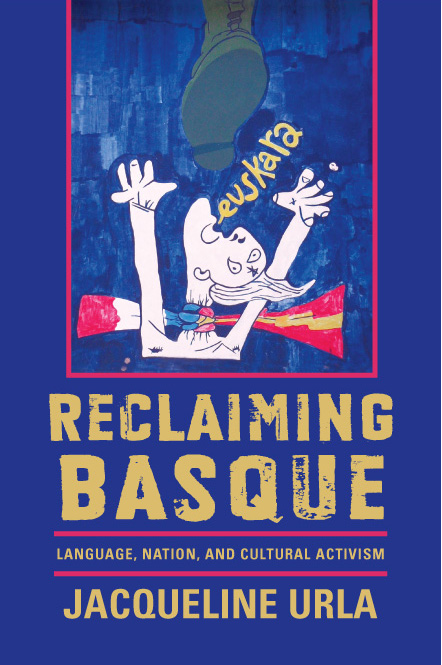 The Basque language, Euskara, is one of Europe’s most ancient tongues and a vital part of today’s lively Basque culture. Reclaiming Basque examines the ideology, methods, and discourse of the Basque-language revitalization movement over the course of the past century and the way this effort has unfolded alongside the simultaneous Basque nationalist struggle for autonomy. Jacqueline Urla employs extensive long-term fieldwork, interviews, and close examination of a vast range of documents in several media to uncover the strategies that have been used to preserve and revive Euskara and the various controversies that have arisen among Basque-language advocates.
Author Bio
Jacqueline Urla is professor of anthropology and the director of the Modern European Studies Program at the University of Massachusetts, Amherst. She has published numerous articles and essays on the Basque culture and language, and is the coeditor of Deviant Bodies: Critical Perspectives on Difference in Science and Popular Culture.
Reviews
“Jaqueline Urla has written an extraordinary book. The result of 25 years of continuous engagement with the Basque language movement and its struggle to normalize the standing and use of the Basque language, Euskara, the book is a unique contribution to our knowledge of social, political, cultural, and economic mechanisms involved in minority language revival.”—The Council for European Studies
The Council for European Studies
“Reclaiming Basque is an excellent study of a culture that seeks its own voice, free from the banners of France and Spain.”—The Midwest Book Review
The Midwest Book Review
© University of Nevada Press
Design by BDG