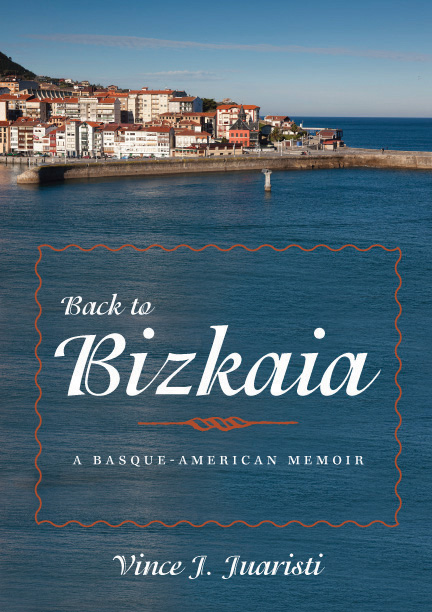 Back to Bizkaia
A Basque-American Memoir
$21.95

Nevada sheep rancher Joe Juaristi spoke for years about making a trip back to the Spanish Basque Country that he left sixty years earlier, but each time the subject came up the discussion evolved into a family debate about the scope and members of the journey. Finally Joe's son, Vince, secretly resolved to organize the trip that his father wanted and needed--the two of them, traveling alone, making a quiet reunion with Joe's twin sister, who suffers from Alzheimer's, visiting other aging siblings and friends, and recounting the places that formed Joe's memories of his youth.

Back to Bizkaia is part travel book, part memoir of two men exploring their mutual roots and their unique father-son bond. The narrative intertwines an engaging account of the contemporary Basque Country with Joe's experiences as an immigrant making his way in a new country and Vince's memories of growing up in a close Basque-American community in the American West. This is a book about Basques and their American families, but on another level it is every immigrant's story of return to a beloved homeland.

Vince J. Juaristi, a native of Elko, Nevada, is president and CEO of a management consulting company in Alexandria, Virginia. This is his first book.

Reviews
“Back to Bizkaia is a heartwarming account of a Basque American who takes his father back to Spain. All the memories of father and son are vivid and engaging. Most winning is the fully realized portrait of the father himself, Joe Juaristi, a charming stoic.” -- Frank Bergon, author of Jesse's Ghost

"A sweet story of the author's filial devotion to his father, Joe Juaristi, a Basque immigrant who worked for a number of years as a sheepherder and later bought the famous Star Hotel in Elko, Nevada. Juaristi weaves a simple chronicle of his father's trip back to the Old Country into an engaging father-and-son story." -- Joxe Mallea-Olaetxe, author of Speaking Through the Aspens: Basque Tree Carvings in California and Nevada

"Touching on the roots of Basque country and the American west, Back to Bizkaia is a fine tale of an immigrant revisiting their motherland of Spain." -- Midwest Book Review
© University of Nevada Press
Design by BDG