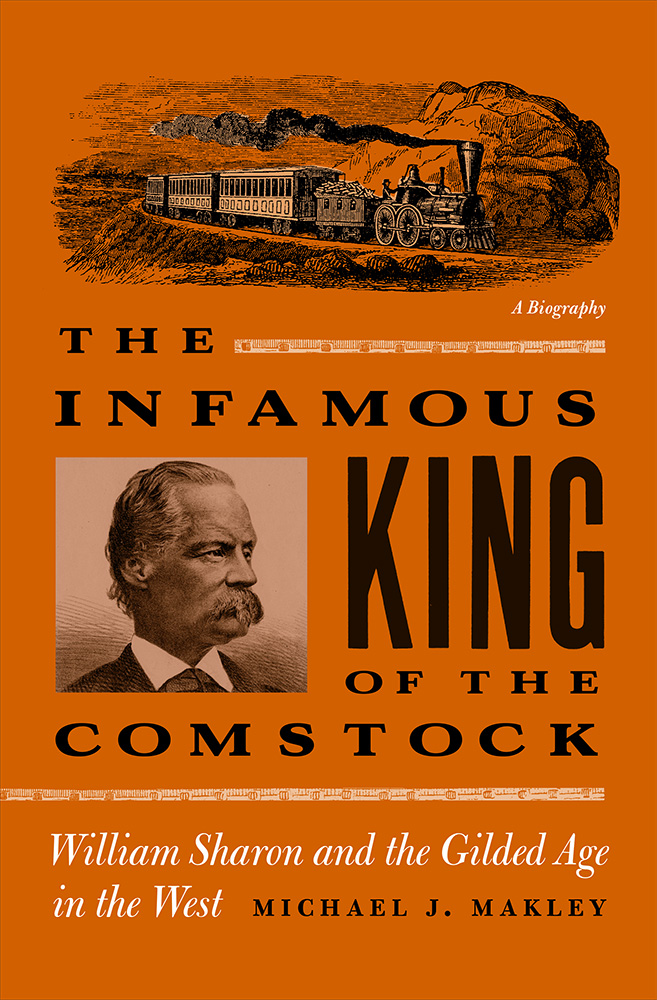 Infamous King Of The Comstock
William Sharon And The Gilded Age In The West
$24.95

William Sharon was one of the most colorful scoundrels in the nineteenth-century mining West. He epitomized the robber barons of the nation’s Gilded Age and the political corruption and moral decay for which that period remains notorious; yet he was also a visionary capitalist who controlled more than a dozen of the greatest mines on Nevada’s mighty Comstock Lode, built the Virginia & Truckee Railroad, manipulated speculation and prices on the San Francisco Stock Exchange, and revived the collapsed Bank of California. One enemy called him “a thoroughly bad man—a man entirely void of principle,” while a Comstock neighbor called him “one of the best men that ever lived in Virginia City.” Both descriptions were reasonably accurate. In this first-ever biography of one of Nevada’s most reviled historical figures, author Michael Makley examines Sharon’s complex nature and the turbulent times in which he flourished. Arriving in San Francisco shortly after the Gold Rush began, Sharon was soon involved in real estate, politics, banking, and stock speculation, and he was a party in several of the era’s most shocking business and sexual scandals. When he moved to Virginia City, Nevada’s mushrooming silver boomtown, his business dealings there soon made him known as the “King of the Comstock.” Makley’s engaging and meticulously researched account not only lays bare the life of the notorious but enigmatic Sharon but examines the broader historical context of his career—the complex business relationships between San Francisco and the booming gold and silver mining camps of the Far West; the machinations of rampant Gilded Age capitalism; and the sophisticated financial and technological infrastructure that supported Virginia City’s boomtown economy. The Infamous King of the Comstock offers a significant fresh perspective on Nevada and the mining West.
Author Bio
Michael J. Makley is the author of several studies of Nevada history, including The Infamous King of the Comstock: William Sharon and the Gilded Age in the West and John Mackay: Silver King in the Gilded Age, and coauthor of Cave Rock: Climbers, Courts, and a Washoe Indian Sacred Place, all from the University of Nevada Press. He lives in the eastern Sierra Nevada.
Reviews
"Makley demonstrates that detailed, prodigiously researched biographical writing can reveal the complex intricacies of history." — Southern California Quarterly
"...makes valuable contributions to the history of mining in the American West and will merit inclusion in many libraries concerned with that subject." — Western Historical Quarterly
"Makley deserves commendation for rescuing a significant figure from his undeserved obscurity." — New Mexico Historical Review
© University of Nevada Press
Design by BDG