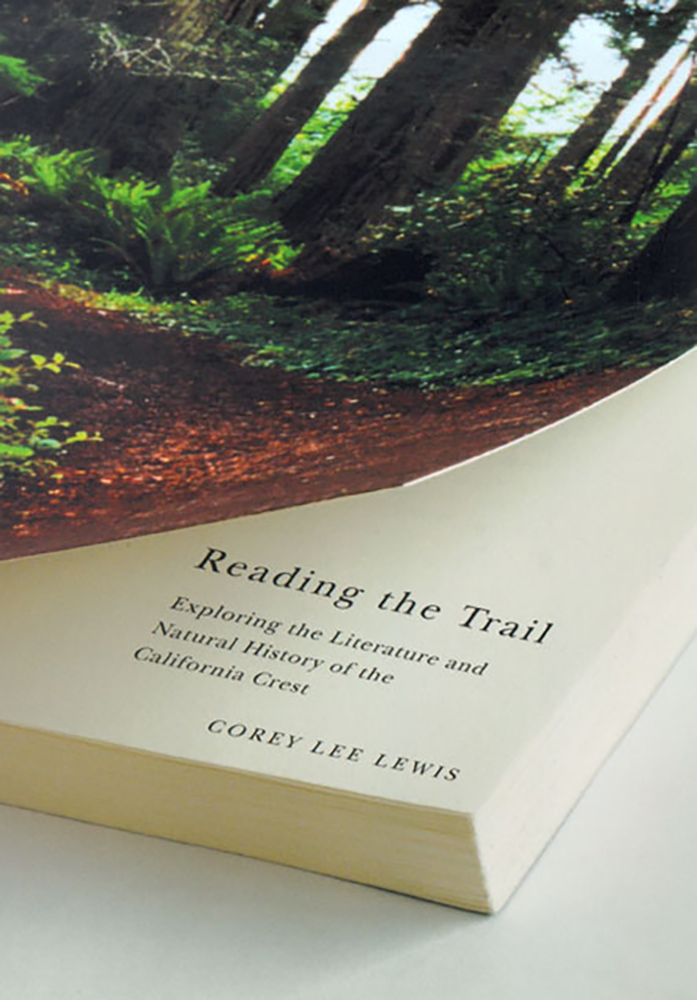 Reading The Trail
Exploring The Literature And Natural History Of The California Crest
$24.95

A provocative new way to read and interpret the classic works of John Muir, Mary Austin, and Gary Snyder, and to bring their ideas into the discussion of ecological values and the current environmental crisis. Lewis combines a perceptive discussion of their work and ideas with an engaging account of his own trail experiences as hiker/backpacker and volunteer trail builder, proposing that such a field-based, interdisciplinary approach to literary study and outdoors experience can enrich our appreciation for the work of nature writers.

Corey Lewis is currently a professor of Creative Writing and Literature at Humboldt State University. He teaches courses in Nature Writing, Creative Nonfiction, and Environmental Literature both on the HSU campus, and in its surrounding environs. Corey earned his Ph.D. from the Literature and Environment Program at the University of Nevada, Reno in 2003 while specializing in field-based approaches to the study and teaching of environmental literature and writing. Corey currently works with the California Wilderness Coalition to preserve California Wildlands, and the Peak Oil Action Group to create the policy and community-based changes necessary for post-fossil fuel sustainability. Among other writing projects, he is currently working on a book exploring cultural and environmental collapse. “As a writer and a thinker I am primarily interested in exploring the age-old question: How should we be in the world?”Corey enjoys camping with his two boys, Hunter and Bodie, and his wife, Micki, as well as gardening and working on home sustainability projects on their 3.5 acre home-site in the Mad river watershed. They continue to spend much of the summer season in the high country, exploring along the California crest, while the colder weather of winter finds them among the redwoods of the North coast. While in Nevada, Corey was a founding member of the Great Basin Institute and the Nevada Conservation Corps, two University of Nevada, Reno-based non-profits that provide field-based courses in environmental education and jobs in ecological restoration and public lands management. He also served on the board of directors for Friends of Nevada Wilderness, helping that organization to more than triple the acres of designated Wilderness in Nevada in just over 5 years. In addition to teaching writing and literature, Corey has taught Wilderness Survival and Tae Kwon Do for many years. This background in “practice,” or application, has led Corey to constantly seek connections between our words and deeds, between our literature and our land. Growing up on a small farm in eastern Kansas, Corey spent much of his time camping, hunting, fishing, gathering wild edibles and getting to know the land surrounding his family’s home. He was also witness to farm foreclosures, suburban sprawl and a host of other ecological ills that forged his interest in activism at an early age.

“For readers wishing to enrich their understanding of Austin, Muir, and Snyder—or for instructors wanting field-tested suggestions for combining the study of literature with the study of the environment—this is a sure-footed book brimming with insight.” —Hal Crimmel, ISLE 13.2, Summer 2006