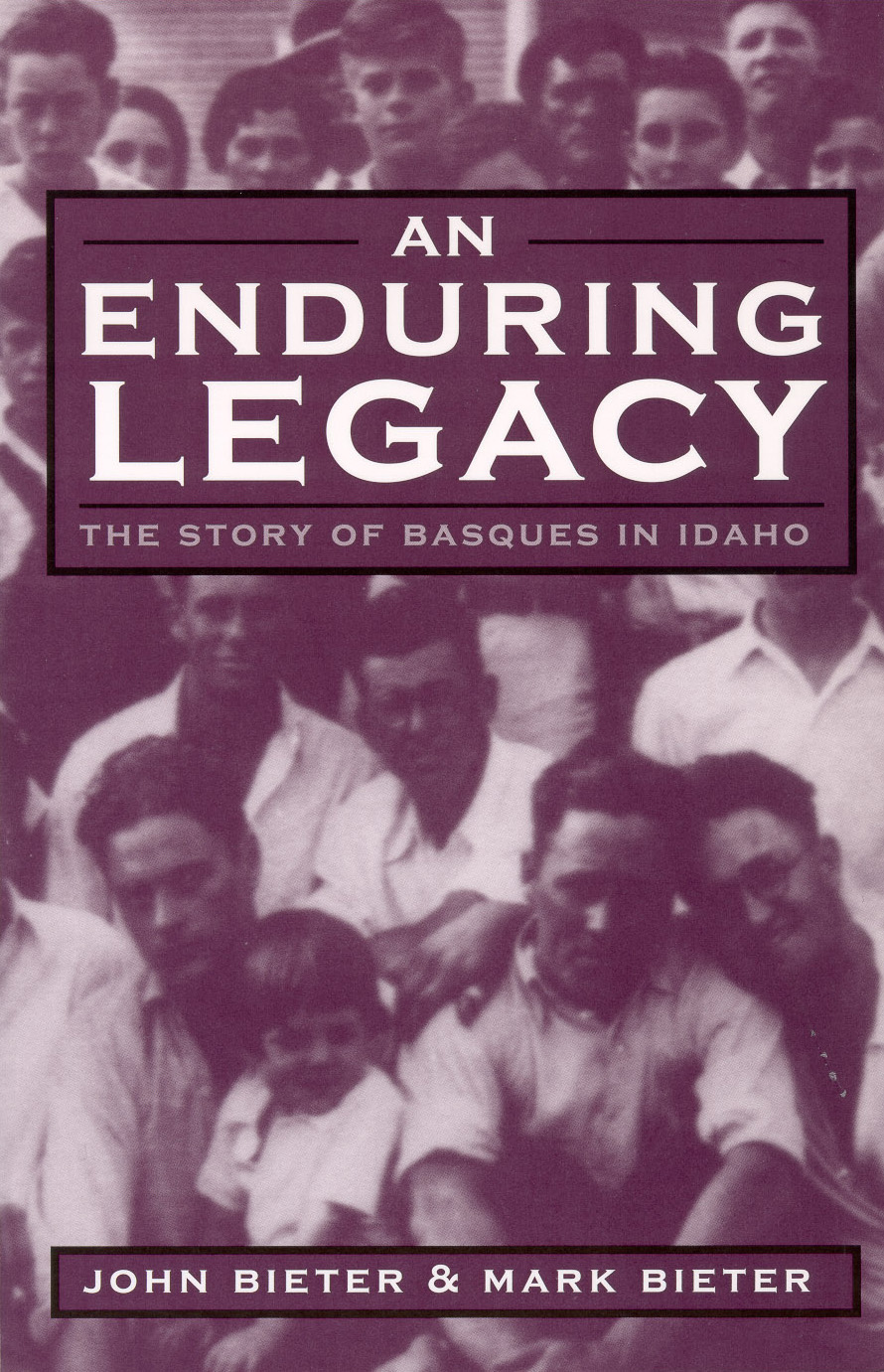 Enduring Legacy
The Story Of Basques In Idaho
$19.95

In this volume, brothers Mark and John Bieter chronicle three generations of Basque presence in Idaho from 1890 to the present, resulting in an engaging story that begins with a few solitary sheepherders and follows their evolution into the prominent ethnic community of today.

John Bieter is a professor at Boise State University and director of the Cenarrusa Center for Basque Studies.

Mark Bieter is an associate at Wilmer Cutler Pickering Hale and Dorr in Washington, DC. He received his B.A. from Gonzaga University and his J.D. from Duke University.

"Mark and John Bieter have filled a very great gap in Idaho history. The cultural, economic, artistic, and civic gifts given to Idaho by the Basque immigrants and their descendants are immense, and this interesting and well-researched history of their struggles and triumphs is essential for fully understanding and appreciating our Idaho heritage." —Governor Cecil Andrus, 1987-1995

“This study focuses on the tightrope the immigrants walked between assimilation and cultural preservation. The authors find a general pattern of behavior over the three generations under study. The first immigrants struggled to survive in their new environs, and many turned to sheepherding for subsistence. Later, Basques opened businesses and worked in local industries. The second generation began a more rapid assimilation, with greater access to education and middle-class jobs. These Basques came of age between the world wars, and the patriotic fervor of that era hastened their Americanization. The third generation, coming of age around the 1960s, generally celebrated selective elements of their grandparents’ culture and sought to revive the traditions through festivals, music, and even an exchange program between Boise State University and the Basque region of northern Spain. The authors have traced a story of accommodation and preservation that has, in their perception, a positive outcome. The Basques have maintained their distinctiveness far better than most immigrant groups. This book is well-researched and accessible, and tells a compelling story about a unique group.” —Richard D. Loosbrock, Journal of the West, Summer 2003

“Tinged with a wistful nostalgia, An Enduring Legacy is rich with stories and comments from several generations of Basques. Through these stories, the reader glimpses lives and families on the cusp of great changes as they arrive, eager yet bewildered in a land they thought was full of opportunity.” —C.M., Boise Weekly, July 2000

“An Enduring Legacy is a richly detailed book, well researched and written, and a valuable contribution to our understanding of the variegated human landscape in the American West.” —Dean May, Pacific Northwest Quarterly, Summer 2001

“An Enduring Legacy is an impressive piece of scholarship. The authors obviously have great respect and affection for their subject, yet this respect and affection has not caused them to approach the Basque experience in Idaho in an uncritical fashion. They have used a wide variety of sources, including more than seventy interviews, to bring the Basque story to life in a personal way. At the same time, they have placed that story within both a national and international context.” —Robert R. Swartout, Jr. , Montana: The Magazine of Western History, Summer 2002