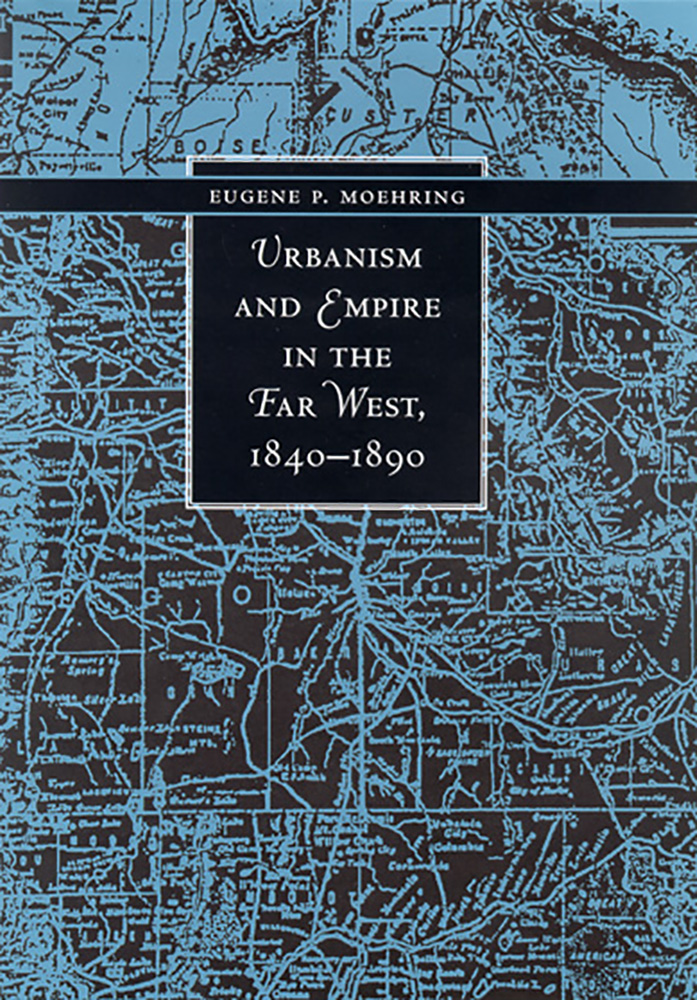 “Americans, like their early European forebears and other world powers, realized that while farms, ranches, and other rural institutions were important, towns and cities were dynamic structures, capable of controlling and reorganizing space for miles—and even hundred of miles—beyond their municipal limits.... In their efforts to control and exploit outlying lands, America’s Western cities and towns resembled ancient Athens, imperial Rome, renaissance Venice, and other great powers.” So states noted historian Eugene P. Moehring in this new analysis of urbanism in the development of the American West during the frontier era. Examining seven states of the Far West, Moehring reveals how Americans used cities and towns to build their Western empire, developing their urban centers with wealth from the hinterlands (San Francisco, for example, built its initial fortune on the gold of the Mother Lode) and supplying their growing populations with foodstuffs and other essential resources from their rural tributaries. At the same time they used their regional connections as outlets for the goods and services of the cities. Towns were also used as bases for further advance into unsettled territories, especially into Native American lands. The scope of Moehring’s inquiry is wide, incorporating such themes as the roles of railroads, local and regional capital investment, and boosterism in the creation of municipal centers; interactions with Indians; the relationship between water and town development; the importance of agricultural centers in reinforcing trade; the role of urban competition; and the part that cultural and racial superiority assumptions played in creating the American urban framework. Engagingly written and based on meticulous research, Urbanism and Empire in the Far West is a work of major significance by one of the West’s most respected historians.
Author Bio
Eugene P. Moehring, a native of Brooklyn, is professor of history at the University of Nevada, Las Vegas. He is the author of Resort City in the Sunbelt: Las Vegas, 1930–2000 and Urbanism and Empire in the Far West, 1840–1890 and coauthor of Las Vegas: A Centennial History, among other works.
Reviews
What is most significant here is that Moehring forces us to think about the region’s towns as influential networks—of capitalism, information, transportation, and culture—rather than isolated spots on the map. . . . Taken individually, most of the places that Moehring discusses seem insignificant. Who would spend much time worrying about Bellevue, Idaho, or Barstow, California? Yet taken together the innumerable nineteenth-century western towns emerge as an important historical force.” —Linda Nash, The Journal of American History, June 2005
© University of Nevada Press
Design by BDG