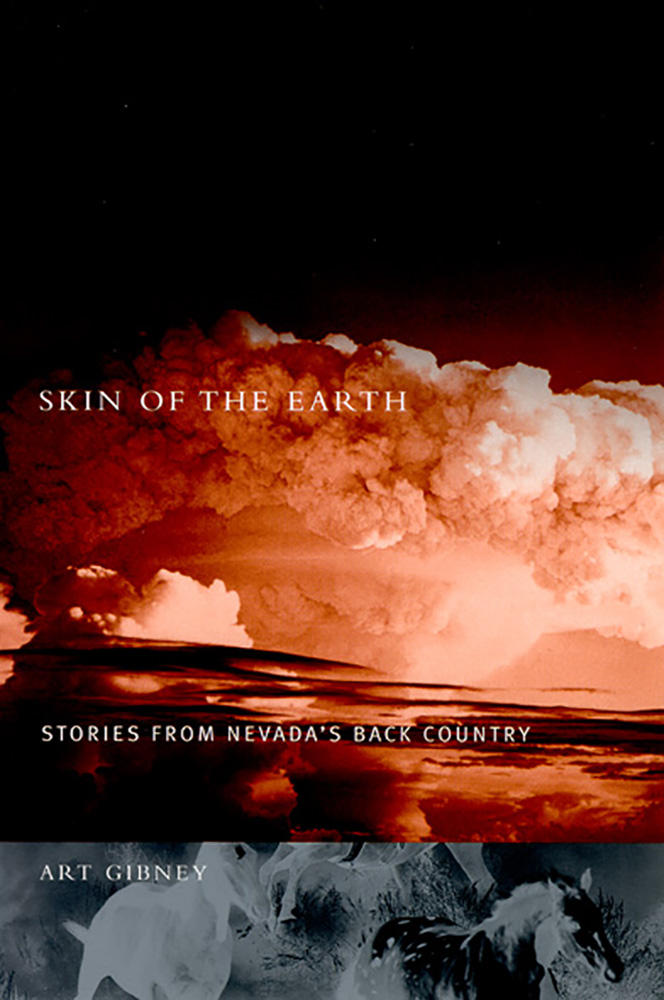 Skin Of The Earth
Stories From Nevada'S Back Country
$16.00

Nevada's back country is a region of drought-parched sagebrush and snow-clogged winters, rugged ranchers and fiercely independent loners seeking solitude in remote canyons. But the Nevada of Art Gibney's superb new story collection is part of the modern West, where traditional ways collide uneasily with apocalyptic technologies, ranchers contend with BLM bureaucrats about the use of the land, downwinders die of horrible malignancies, and no canyon is inviolate to the ubiquitous military presence. Gibney vividly captures the tensions of the contemporary rural West—of ranchers struggling to preserve a valued way of life and sons yearning to escape to easier livelihoods, of dreamers trying to flee the modern world only to find themselves entangled in its complications, of a beautiful landscape full of invisible and deadly poisons. Few stories of the West depict the primal herder's life as vividly as "The Wild Cow," and the heartbreaking dignity of the dying rancher in "The Manure Spreader" will linger long in the reader's mind. The characters in "A Hard Way to Make a Hundred Bucks" explore the mystery of a secret Department of Defense installation while reflecting on the larger mystery of an impending birth, and a drought in "Cloudshine" launches a series of events that threaten a peaceful Mormon community. Gibney knows his characters well, their strengths and their foibles, and he knows the land they live on. He writes with sympathy, humor, a keen sense of irony, and a sharp ear for dialogue. These are memorable stories of a West that is both remote from and thoroughly enmeshed in the modern world, a rural place where cattle and rabbit brush live side by side with atomic fallout, where open spaces conceal the deepest secrets of the human heart.
Author Bio
An early career with the Forest Service first provided Art Gibney with the opportunity to see, explore, and enjoy Nevada's vast rural region-an experience that informs his writing today. Gibney's short fiction has appeared in many literary publications including the International Quarterly, The Crescent Review,Other Voices, ZYZZYVA, and Story Quarterly. He currently resides in Northern California.
Reviews
“Nevada has long been mistreated as an empty quarter. Gibney’s powerful stories, however, populate this so-called blank space, making it an epicenter of strange doings whose shock waves will reach you wherever you may be.” —Cheryll Glotfelty, ISLE
“There is a strong sense of home in all these stories, a pure love of place, especially when it has to be fought for and even when it has to be left.” —Susan Salter Reynolds, Los Angeles Times, September 8 2002
“Gibney is a serious writer worth knowing about.” —Catherine Coggan, Southwest BookViews, Winter 2003
“Without nostalgia, Gibney presents characters in the changing rural West, characters who seek satisfaction in life even if it means living outside the traditional Western lifestyles.” —Doug Werden,Southwestern American Literature, Spring 2003
“Slim first collection that goes into unexplored territory both on the map and in the heart.” —Kirkus Reviews, July 1, 2002
“…Those who say young writers have forgotten the lessons they should have learned from Raymond Carver ought to take a look at Gibney.” —Howard Junker, editor of ZYZZYVA: The Journal of West Coast Writers & Artists
© University of Nevada Press
Design by BDG