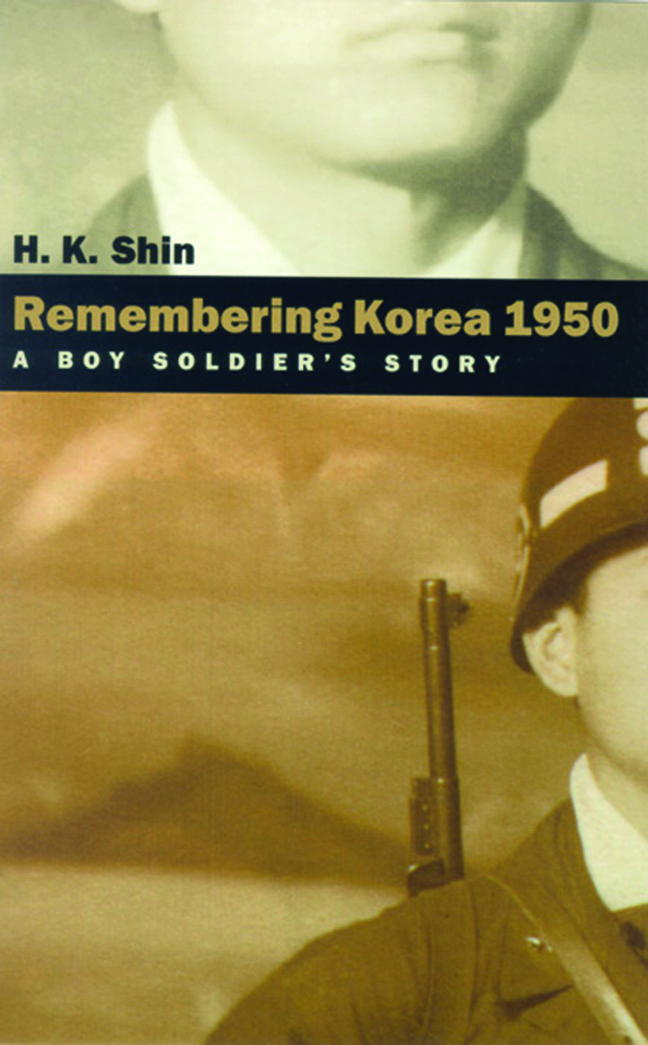 Hyung K. Shin was sixteen years old when the North Korean army invaded South Korea in June 1950. Fleeing his home, Shin soon found himself alone in Pusan, a refugee without resources or any means of support. To save himself from destitution, he lied about his age and volunteered for service in the South Korean army. Shin’s account of the months that followed is a moving record of the Korean War from the perspective of an ordinary ROK soldier. He recounts his hasty training and subsequent experiences as a battlefield soldier in North Korea, as a guard in a prisoner-of-war camp, and as a refugee again in the massive flight of civilians and ROK military personnel retreating before the onslaught of the Chinese invasion. Through it all, Shin struggles to retain his humanity and pursue his education. In the process, the naïve schoolboy becomes a man. Today, Hyung K. Shin is an internationally respected chemist, but in the pages of this memoir he carries us back to Korea during a pivotal moment in that country’s history. This is the first account in English that describes the war from the perspective of a Korean who lived through and fought in it. Shin’s detailed and lively narrative is a stirring monument to the survival of human decency and kindness in the midst of terror, cruelty, despair, and the destruction of a proud nation.
Author Bio
After the war, Hyung Kyu Shin came to the United States, studying at the University of Utah before joining the faculty of the University of Nevada, Reno, where he is professor emeritus of chemistry. A renowned scholar, he is the author of numerous articles on theoretical chemistry and chemical physics. This is his first nonscientific work.
Reviews
“Remembering Korea 1950 fills a unique and important gap in Korean War literature. Particularly interesting is H.K. Shin’s description of the effect of war on civilians. Their homes obliterated, their possessions looted, and their family structures destroyed, they mixed with soldiers as they fled and, with the soldiers, died in air raids and artillery barrages. This is an important book for anyone striving to understand the Korean conflict. It is equally valuable in presenting an unsanitized picture of warfare as it actually affects people—soldiers and civilians alike.” —William Dannenmaier, author of We Were Innocents: An Infantryman in Korea
“Without question, Shin’s memoir is an important book . . . . This inside view and Korean perspective of the conflict yields a unique voice that has been sadly missing in much of the translated literature. Similarly, it is an extremely important narrative for anyone who wants to understand the human dimensions of the Korean conflict, especially the plight of refugees on both sides of the 38th Parallel. Despite its brevity, it’s a powerful chronicle of those events.” —Jeffrey Miller, The Korea Times
“Putting memories to paper after fifty years, Shin writes as clearly as if he witnessed the events just yesterday . . . an eyewitness account of the real cost of war.” Korean Quarterly
“A unique, vivid, and intensely moving record of the Korean War. . . . Without question, Shin’s memoir is an important book and fills a gap in Korean War literature.” Korea Times
© University of Nevada Press
Design by BDG