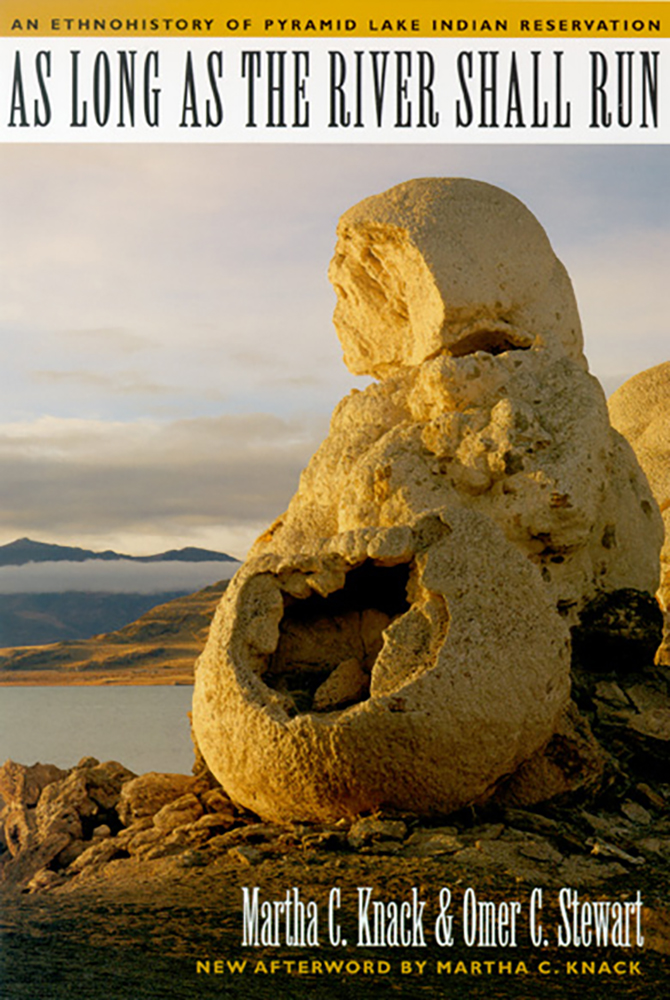 As Long As The River Shall Run
An Ethnohistory Of Pyramid Lake Indian Reservation
$34.95

The history of the Northern Paiutes of Pyramid Lake in northwestern Nevada is one fraught with the conflicts and tensions of the modern West—relentless encroachment by non-Indians into Indian lands; disputes over scarce water; endangerment of a rare and valuable species of fish—all played out on a stage that stretches from the centers of national politics in Washington, DC, to a remote desert reservation where an ancient people struggles to preserve the traditional center of its spiritual and economic life. Martha Knack’s and Omer Stewart’s brilliant interdisciplinary study of the Pyramid Lake Reservation, first published in 1984, is considered a major landmark in American Indian history—a lucid and insightful examination of the Paiutes, their reservation, and the ongoing controversy over control of their land and the life-giving Truckee River waters that feed Pyramid Lake. The complex interethnic relations described in this book offer readers a case study of the dominant issues in Indian affairs and the themes of the legislation and court decisions that shape the fates of native peoples.
Author Bio
Martha C. Knack is professor of anthropology at the University of Nevada, Las Vegas, and an ethnohistorian who has done field research and archival studies with Northern and Southern Paiute people for more than twenty years.

Omer C. Stewart began doing anthropological fieldwork among Great Basin native peoples in the 1930s and continued to do so actively until his death in 1991.
Reviews
"As Long as the River Shall Run is considered one of the most comprehensive historical, cultural, and economic studies of a Great Basin tribe ever produced." —Richard Moreno, Nevada Magazine
"Through the test of time, As Long as the River Shall Run should become a classic in American Indian scholarship. It ought to be required reading for all scholars concerned with Indian water rights." —Patricia C. Albers, American Anthropologist
"A milestone in American Indian history. A brilliant interdisciplinary volume that will be of intense interest to both historians and anthropologists." —Wilbur R. Jacobs
© University of Nevada Press
Design by BDG