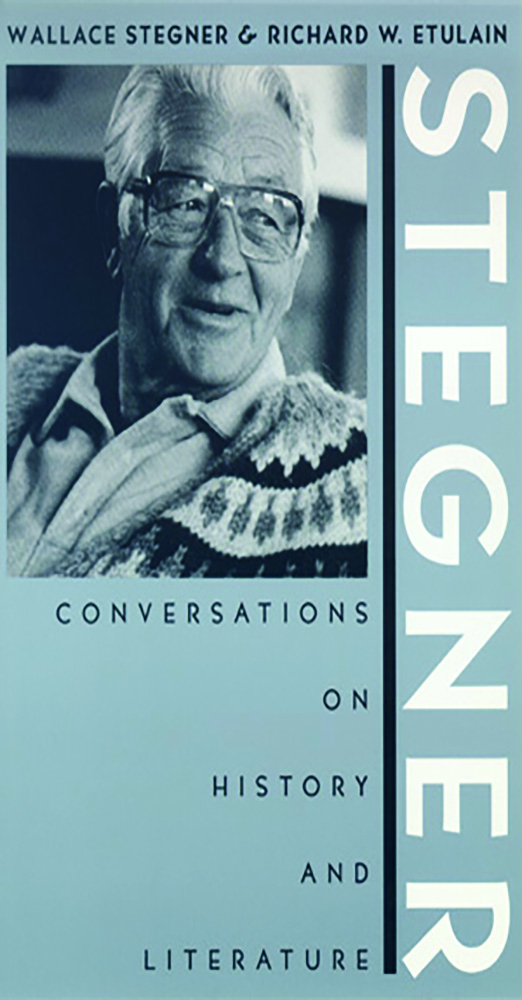 Stegner
Conversations On History And Literature
$21.95

Wallace Stegner, a major American novelist and conservationist, is interviewed by Etulain, a renowned Western scholar, in a series of discussions. Originally published in 1983 and entitled Conversations with Wallace Stegner on Western History and Literature, this book is the ultimate Stegner interview. New foreword by Stewart Udall.
Author Bio
Wallace Stegner (1903-1993) was the author of many books of fiction and non-fiction, including the National Book Award-winning The Spectator Bird (1976) and Crossing to Safety. Angle of Repose won the Pulitzer Prize in 1971.

Richard W. Etulain specializes in the history and culture of the American West and modern US. His PhD is from the University of Oregon (1966). He taught at Idaho State University (1970-79) and from 1979 to 2001 at the University of New Mexico, where he directed the Center for the American West. He has lectured abroad in several countries. Etulain is the author or editor of more than 40 books, including: The American West: A Twentieth-Century History (coauthor, Nebraska, 1989), Writing Western History: Essays on Major Western Historians (1991; Nevada, 2002), Re-imagining the Modern American West: A Century of Fiction, History, and Art (Arizona, 1996), Portraits of Basques in the New World (coeditor, Nevada, 1999), Telling Western Stories: From Buffalo Bill to Larry McMurtry (New Mexico, 1999), The Hollywood West (coeditor, Fulcrum, 2001), César Chávez: A Brief Biography with Documents (editor, Bedford Books, 2002), Wild Women of the Old West (coeditor, Fulcrum, 2003), Western Lives: A Biographical History of the American West (editor, New Mexico, 2004), and The American West: A Narrative History, forthcoming. Etulain’s essay “The American Literary West and Its Interpreters,” was selected the best essay in western history for 1976; his books have received numerous awards and recognition. Professor Etulain also edits five series of books in American and western history. Etulain was President of the Western Literature Association (1978-79) and the Western History Association (1998-99). In 2001, the University of New Mexico established a lectureship in his honor in western American literature and culture. Professor Etulain is completing a history of the American West and researching a book on Abraham Lincoln and the American West.

Reviews
“Richard Etulain has put together a masterful interview. His Stegner is an excellent measure of not only Stegner himself, but of the West generally. You can turn to this work for Stegner’s assessment of his writing, especially of The Big Rock Candy Mountain (1943) and of Angle of Repose (1971), which get full chapters. But there is also information on Stegner’s formative years in Canada and Montana, his life among the Mormons, his academic career, and his work to protect the wilderness. At the end, there seems hardly a stone of Stegner’s that remains unturned.” —Western American Literature
“Almost every page of the book is studded with strikingly-phrased, thought-provoking comments by Stegner.” —Richard Maxwell Brown, Oregon Historical Quarterly, Winter 1984
“The book is spontaneous, open, informal, and engaging. It is the kind of book that will appeal not only to Stegner devotees, but to those interested in the views of a knowledgeable commentator.” —Utah Holiday, March 1984
“Stegner consititutes a model for effective oral history.” —Pacific Northwest
“Wallace Stegner is a regional writer and thinker in the very best sense of the term. Never bound by narrow provincialism, he uses the American West as his springboard to wide-ranging and perceptive thoughts about all of contemporary civilization. He is indeed a twentieth-century literary figure of universal stature, as this book shows.” —New Mexico Historical Review
© University of Nevada Press
Design by BDG